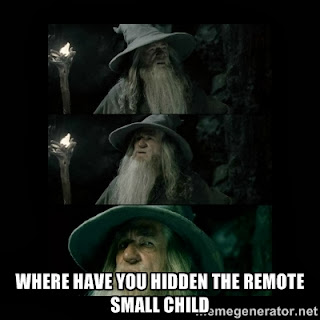 My current bête noire is children wandering around the house clutching a remote control as though, to continue the Lord of the Rings theme, it is their precious and they can’t let go of it. I had to extricate the television remote from Fifi en route to the toilet yesterday. I suspect it’s something to do with the channel wars but since they have a TV in their playroom and there is one in the sitting room, it really shouldn’t be an issue but somehow it is. This invariably leads to the situation where I come downstairs to find the kids watching Breakfast News in the morning because the Boxee remote, the Blu Ray remote AND the television remote are elsewhere. Once, joy of joys, I even came down to find the two of them thwarted entirely and reading books. Needless to say, it didn’t happen again.

The general strolling about with something that you really shouldn’t have is a running theme in our house and it’s a pastime that Ned now enthusiastically takes part in too. It’s like someone has told him you can go anywhere if you stride purposely clutching a clipboard but he doesn’t know what a clipboard is and is trying out nearly every movable object in the house in the meantime.

We have a fairly rigid routine for bedtime that sees the kiddywinks tucked up by 7.30 most evenings (yes, it has slipped from 7 but hopefully as the nights get darker, we’ll reverse that trend) but invariably we spend the next half an hour turning the house upside down looking for something. Once we had to buy the boy an entirely new pair of plimsolls to replace the new pair of plimsolls he hadn’t actually worn but had managed to put somewhere beyond the wit of man.

Wifey and I both have things we’d like to do, hobbies or games to play, books to read that do not include rummaging behind the sofa for the 8th time so far this week looking for the something that shouldn’t have been touched in the first place. I’m not alone in this am I?