I’ve been itching to try my hand at stop motion video properly for absolutely ages. There is so much more you can do creatively with models, and thanks to Playmobil sending us some cool stuff, I had some stuff to hand to attempt to make Jurassic Park IV before the movie moguls managed to.

Stopmotion Studio works on Windows and I can personally confirm it works perfectly well on Windows 8.1. It’s Windows only, so you if you a Mac you’ll have to look elsewhere which is a shame since it’s really good fun and easy to use. Although aimed at kids like most software of this sort, it does this by being easy to use rather than garishly horrendous on the chunky icons and colours. It’s got a simple and elegant interface that I liked.

Unlike some of the other stop motion packages, Stopmotion Studio doesn’t come with it’s own camera. This isn’t necessarily a bad thing; Hue Animation Studio comes with a camera and it’s pretty terrible. In fact you can see how bad it is as I shot the above video on it. Stopmotion Studio works with resolutions up to 1080P and can even use DSLRs with Liveview. I think I’d rather be able to buy my own decent camera for use in animation, so to my mind Stopmotion Studio does it right.

In use, you can simply press the spacebar to take a frame of animation, and the “onion skinning” (showing the previous frame in transparent format so you can see how much you’ve moved your models) works really well. You can chose your frame rate, anything from 5 to 30 frames per second in increments of 5. We shot our video at 5 frames per second. This means our 50 second video has two hundred and fifty individual images in it. Imagine if we’d shot this in a more standard frame rate of 25 frames a second- we’d have needed to have taken 1,250 pictures. Bonkers. 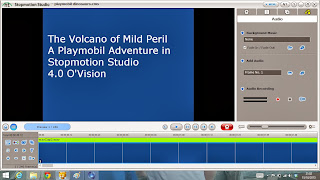 Adding sound once you’ve shot your video is dead easy too. You simply hit the audio record button, are given a 3,2,1 count down and off you go, giving audio over the top of the action. If you cock it up, you can delete it and start again without affecting the video itself.

There are some rudimentary options for putting credits and text on. Personally, in the future I’ll probably add this sort of extra in Adobe Premier Elements since it’s a bit more powerful and flexible in terms of text. Having said that, considering it’s a real side show from the actual main focus of Stopmotion Studio, it’s perfectly adequate.

There are more advanced features like Chroma key (green/blue screen effects for putting your animation onto different backgrounds) and you can import audio rather than just narrating over the top. There are no real short cuts in animation and what you get out is definitely a fair reflection of what you put in. Our 50 second video took a couple of hours during the last England international (2-0 versus Poland if you’re interested). That time took the plotting, finding all the bits and bobs and shooting it. Once or twice we knocked a dinosaur or archaeologist over but the onion skinning allowed us to reposition the characters pretty well. The visual fidelity isn’t brilliant but that is entirely down to the camera we used. With better lighting and a better camera, things will look much better.

Once you’ve animated your project, you can save it as a project so you can come back to it and improve on it and you can also export it to a variety of formats or directly to YouTube or Facebook. I tried the direct upload but couldn’t get it to work: 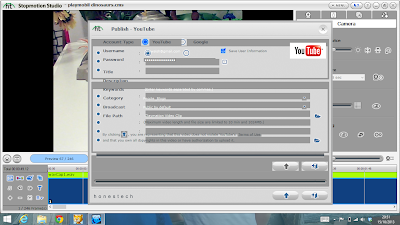 You can see the form is broken and I couldn’t get it to work. This may be a Windows 8.1 issue because a quick google doesn’t show it as a common problem. I did have to pause and scratch my head when I went to save it because most of the formats said 25 frames per second rather than the five I had filmed it in. The software didn’t make it clear that it effectively duplicated each image 5 times so our original 50 second video still ran for 50 seconds and not for 10!

All in all though, I have absolutely no qualms about recommending Honestech’s Stopmotion Studio 4.0. It is head and shoulders above the competition, both easy to use but powerful enough to make some really good animations, skill and effort depending of course. Stopmotion Studio 4.0 isn’t cheap, it’s RRP is £59.99. That is a lot of money, especially given you don’t get a camera but in terms of it’s power, I think it’s probably worth the money- Hue Animation Studio has an RRP of £79.99 and is inferior in every single way (I reviewed Hue back in December 2011, so I have first hand experience of it and have also tried the latest version). If you’ve been pondering the two, I can put your mind at ease and tell you this is definitely the one to buy.