In a daft way the LEGO Star Wars animated short films remind me a lot of the old WB Animaniacs. They’re frenetic, often hilarious and completely wasted on kids. So when we were invited to a drop in session in Leicester Square to celebrate the launch of Lego Star Wars: The Yoda Chronicles, we said yes without hesitation. 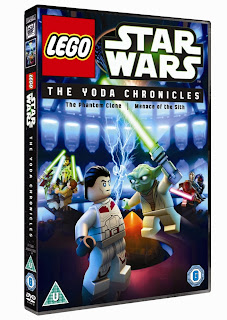 I’m glad we did, even though the Empire upset Ned a bit by stealing his LEGO, overall we had great fun. The Boy and Fifi absolutely loved the fast frenetic past of Lego Star Wars: The Yoda Chronicles and I also loved all the in jokes that were completely wasted on the kids- like the iconic opening scene from Star Wars, with the Star Destroyer rolling endlessly over the camera being interrupted to show a huge traffic jam, or all the interplay between General Grievous and Count Dooku.

There are two episodes on the DVD, The Phantom Clone and Menace of the Sith. The event had them on loop and I heard more than one parent try to shift their child with exclamations of “Come on, you’ve sat through both episodes 4 times already.” That to my mind is high praise.

The DVD is a fiver for the two episodes and is available to buy now. It certainly inspired some hardcore LEGO building until Darth Vader took a personal interest…