I can remember vividly one of the first motoring experiences I had as a nipper. Fortunately it predated the Simca my dad owned in the late 70’s because that was more than a little embarrassing. No, before my brother came along, my dad still owned and drove a Mark II Spitfire. At this point I should mention that the Mark II was made by Triumph, not Supermarine: 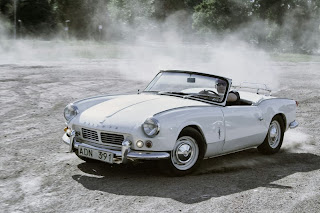 This had replaced an MG Midget which had in turn replaced a Sunbeam Rapier. My dad liked his sports cars back in his youth but this was bought crashing down around his ears on the appearance of this second son, my little brother, in 1977. A few years with a white VW Golf was followed by over a decade with various square Volvo’s. Whilst one of these had a fair amount of pull, it handed exactly like you’d imagine a 1980’s Volvo saloon car would.

Fast forward to 1993 and my dad took early retirement. The first thing he did was to scrub his Volvo and get himself a “project”. The project turned out to be a vintage chrome bumper 1300cc MG Midget. In the interim years since he last owned something rear wheel drive with two seats, the whole concept of classic car insurance had sprung up and given the limited mileage dad did, to and from the gym mostly, it cost a pittance to insure. The car itself needed a bit more work, including new sills, a new exhaust and some work on the chrome but it was a beauty. He even let me drive it a few times. As a blogger I’ve been lucky enough to drive a diverse collection of cars, ranging from a Ferrari 458, to a Volvo S60 T6 through to a Nissan LEAF but my dad’s midget holds a soft spot for me. For starters, despite being absolutely tiny, by dint of it having a miniscule Momo steering wheel I could actually sit in it and drive it easily. Contrast that with the car he replaced it with, a Mazda MX5. Despite being a much bigger car, the steering wheel was so large that my right knee had nowhere to live so I could actually shut the door. Also, when was the last time you drove a car with a fuel pump emergency cut off switch on the dashboard?

I’ll never forget sitting in the car at a set of lights in 1994 with my dad in the passenger seat, when a Vauxhall Nova GTE with gaudy body trim revving next to me. Left it for dead, despite the Midget only having a 0-60 of 13 odd seconds. I don’t think he was expecting such a dinky little car to go quite as quickly.

I’m unlikely to return to the cars of my youth when I get older (or have a midlife crisis) because the only cars I’ve ever owned are a Vauxhall Nova, a VW Polo, a Seat Ibiza, and a Nissan LEAF. The idea of an open top car does appeal to me though and I have ideas of going on camping trips with the boy, with the roof down and a bit of Led Zepp blasting out of the stereo.

What I would like and what I can practically get away with are of course two entirely different things. I’d like a Ferrari California but I would probably settle for a mark II Alpha Romeo Spider for about £4,000. As long as you get one with decent bodywork (no mean feat with a vintage Alpha), you should be okay as mechanically they’re surprisingly robust. Not quite Dustin Hoffman in the Graduate, I think I’d be happy having my midlife crisis in one of these though…