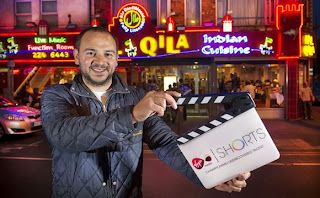 I’ve spent a fair amount of time recently watching short films, partly because I’m off to the Virgin Shorts Award Ceremony next week and thought I should watch the shortlised entrants (and I’m glad I did, there are some seriously talented people out there!) but mostly because I love film and want to up my technical understanding of it so I can making better shorts myself. Currently my YouTube Channel is mostly reviews, with the odd (and by odd, I really mean odd) bit of creative stuff rammed in when I get the chance. The problem is time, and that’s why a lot of what you’ll see on my YouTube Channel is a bit rough and ready.

Still, in the spirit of video making, I thought I’d share a few of the tips and tricks I’ve found out about and ask YOU the reader for any that you successfully employ so I can shamelessly steal them for my own nefarious needs (I’m good like that).

Firstly, I’m indebted to the super awesome Nigel Camp for a couple of these tips, check his blog out because it’s a wealth of information freely given and it’s dead helpful. Now, when it comes to filming stuff, it’s not necessarily all about the bling bling and the ker-ching as some wailing banshee sung a while back. Moving pictures are a lot like still pictures; going out and spending a fortune on high end camera gear wont make you a great photographer, it will just make you a person with a lot of expensive photography gear. For a lot of stuff, your smartphone will be more than adequate. Most of them shoot in at least 720p (HD) anyway. The most important thing to do with your phone is to turn it on it’s side while you’re shooting video. Nobody makes films in portrait, so why should you?

Now you’ve sussed the fact you have a pretty decent camcorder built into your phone, if you want to use it for some (semi) serious creative work, you should head to ebay and type the model of your phone followed by “tripod mount”. You should be presented with a list of cheap (£5ish) devices that will attach your camera to a tripod. Tripods are really important when it comes to making films. If you watch any of the old classics, the majority of the shots are either static, or involve the camera panning across the scene. Nowadays there’s a lot more movement in shot, and if you’ve seen anything Michael Bay has made in the last ten years, you’ll probably get motion sick  but steadicam rigs (even those aimed at home enthusiasts) are really expensive . Besides, if you’re making your film on your own, you’ll need something to stand the camera on wont you? You can get a decent aluminium tripod for a tenner from somewhere like 7Dayshop anyway, so it’s not a huge outlay- around £15 in total for the mount and tripod!

If you want to be a bit more flamboyant, you can spend £100 on a camcorder. You can spend up to several thousand pounds on a camcorder if you really want to, and even buy some lighting for shooting indoors. But you don’t have to if you don’t want to. The results you’ll get with a camcorder will generally be better than those with a smartphone, especially if you cross the £150 boundary because the apparture will be larger, letting more light in for starters but you’ll also get lots of clever technology like image stabilisation and a much higher frame per second count.

When it comes to editing your masterpiece together, you can do it on device- iMovie for IOS is apparently pretty good and there are some Android apps like AndroVid Pro that do a serviceable job but to be honest, I find it much easier on a PC. On Windows 7 or 8 you can download MS Movie Maker for free and it will do you a basic but perfectly serviceable job. Personally, I use Adobe Premier Elements 12. I bought this in a bundle with Photoshop Elements 12 for £50 last December and it’s serviced my requirements perfectly. It will even do green screen and all sorts of other special effects. If in doubt, go the free route though!

Now you’ve got all the gear ready, it’s time for the most important part of shooting a video- the planning. Yes, I am the worlds most boring person but in many ways making a movie is a bit like writing an essay- if you go off half cocked it’ll be a mess, it’ll work much better if you spend a few minutes planning what you are going to do. This will involve a couple of things- a script and some notion of the different shots you want to make. Clever editing can give a sense of motion that isn’t present from static shots, like in my ball throwing edit in my Channel Trailer. Personally I’ve found the best way to pick up a feel for editing video together is to watch your favourite programme with the sound muted and just concentrate on how the shots all fit together.

Don’t forget that you can always improvise when it comes to editing your footage together either. A few generic shots can be used to link things together and there is absolutely no reason why you have to have what you’ve shot in chronological order. In my road test video of the new Citroen C4 Picasso, some of the road test footage out of the car window was actually shot on the way to the site to pick the car up, not that you’d ever know!

Right at the start of this one, I got wifey to video me stalling the car driving off, I stopped the car, she got in and then continued filming as we started off again. Editing out the stopping gives a reasonable impression of us driving off together in one go (hopefully).

I’ve rambled on generally but there are a few specific tips I’d like to end with and they are: