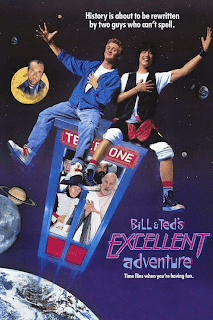 Bill S. Preston, Esq. and Ted “Theodore” Logan, titular heroes of the 1989 film in which they had an excellent adventure, basically give people who don’t hold any truck with religion the ideal mantra to live their lives by. As Abraham Lincoln said at the end of the film:

Be excellent to each other. And… PARTY ON, DUDES!

Of course this is really a dudes rewrite of Matthew 7:12 or Luke 6:31 which basically says “Do to others as you would have them do to you.” Bill & Ted perhaps say it better for a modern audience though…

Can you imagine how different the world would be if everyone was excellent to just one person a day? There are plenty of guerrilla schemes that try to do that, from leaving positive post its about the place with affirming motifs on them, to Dave Gorman’s Better World Project. Why not give something like that serious thought in the lead up to Crimble?