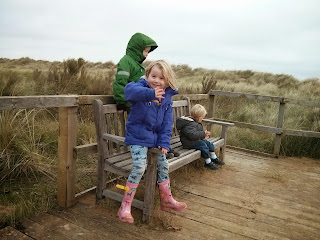 Recently we went to rural Norfolk and stayed in our favourite backpackers lodge at Deepdale. It was a fun weekend, even if Ned didn’t sleep for more than five minutes all weekend. We all like Norfolk, even if it does now hold a deep dark secret for our family*, and take any opportunity to nip up there when we can.

Like a lot of rural places though it’s a pain in the proverbial for mobile phone coverage. Oddly enough there is a certain beach** where the reception is 5 bars but pretty much everywhere else is one to none and it’s a right pain for checking your voicemails or generally keeping in touch with people.

It’s situations like this that Virgin Media’s new Smartcall app is absolutely perfect for. Virgin telephone customers can tie a certain number of mobile devices (phones, tablets, iPods) to their landline number and then tap into their landline phone package to make free calls over wifi. Basically, the rather clever app checks to see what calls are included as free in your package and then lets your mobile make those sorts of calls over wifi for nowt. This is good because it means you can’t possibly run up an unexpected bill, which in turn means you can unleash the app on your kids. Since it doesn’t require a load of bandwidth, you can do it over free wifi in all sorts of places, like Deepdale Backpackers lodge for example.

I had no mobile coverage whatsoever in Deepdale- it was so bad I lost about 50% of my battery charge overnight as my phone valiantly sought out a signal, straining itself half to death but over the public wifi the connection was good enough to call my parents without them even realising that I wasn’t at home (the number that shows up if the recipient has callerID is your home number) on our normal cordless phone.

Setting up the service requires logging on to the Virgin website and going to the My Apps test and registering your device. You’ll then get a text message with a 4 digit pin which is all you need to complete the registration on your device.

There are so many free wifi hotspots about nowadays, it’s worth downloading the app (it’s free) if you’re one of the 4 million odd Virgin Media telephone customers out there. It may even mean you can save a few quid on your mobile contract by bumping your landline deal instead of upping your mobile minutes, which will inevitably be cheaper, although that will be pretty dependent on how you use your mobile. Personally, I have a SIM only contract that has unlimited data but fairly limited minutes, so this app will prove a godsend to me, especially as I tend to make most of my calls from either our office or when we’re out and about and I can either find a cafe or coffee shop to have a sit down in.

If it isn’t working, the Doctor option runs through some tests to see if it can diagnose the problem. Some hotspots for example might run a block on VOIP (Voice Over Internet Protocol) which would mean you couldn’t run the service and this would show as an exclamation mark on the SmartCall service test.

Considering it’s free to Virgin landline customers, it’s a bit of a no brainer really, you do for once genuinely get something for nothing.

*there is a particular sand dune on Holkham Beach that should never be dug up. Buried deep within is a human turd of epic proportion. Pray it stays there until the very end of time.