Not content with reading stories luridly entitled “crash for cash” about the whole cottage industry that’s grown up around the particular insurance fraud where people purposes crash into you and claim for injuries (I’ve even read reports of people cutting their own brake cables so they can slam on the brakes and have you rear end them), I’ve now read stuff about “flash for cash”- motorists flashing you to let you out at a junction and then crashing into you for, you’ve guessed it, personal injury insurance claims. If these people put half the industry and work into legitimate avenues of income, we’d have a nation of Del Boy’s at the very least. As someone who has paid his insurance premiums for 21 years now and, barring a break in while I was playing 5 aside football, has never had to claim, this makes me more than a little cross.

I’ve been aware of in car video recorders for a while now but hadn’t taken the plunge because the availability is bewildering- ranging from the no name £20 units to those in the hundreds. I suppose the exisitence of these devices was really bought home by the Russian meteorite shower that was captured across several cars systems earlier this year:

So when I was asked to be a safety and security tester for Tesco Compare, by testing out an in car camera from HP, a long established and respectable name, my interest was piqued and I said yes. The HP Car Camcorder F200 retails at £99 (against an RRP of £119) and records in full HD (1080P). It has a 120 degree wide angle lens to capture a lot of the landscape in front of you. It’s not as wide as you’d see on something like the GoPro Hero range of action cameras but then it is meant for a different purpose. 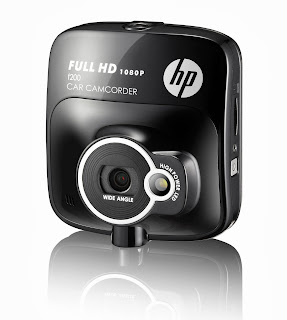 When it comes to idiot proof devices, the F200 comes pretty close to the top of the list. Attach the suction cup to the windscreen, pop a microSD card (not included) into the camera, plug it into the cigarette lighter/power socket and you’re off- as soon as you turn the ignition on the device will start recording. It will loop the recording, so if you never replace the card, once it’s full it will overwrite the oldest recording. By default, it records in 3 minute segments, in a .MOV (Quicktime) format. Scrolling through the simple menus I noticed you could alter this to 5 minutes if you wanted to, or by some button pressing, you can start the device manually and it will record until you turn it off.

A lot of the online reviews seem to complain about the 3/5 minute record time but that seems to ignore the purpose of this device- it’s not primarily about recording a movie of you driving, it’s about recording whats happening in case of accident. Given the resolution and the compression used by the .MOV format, I doubt if it did continuous record out of the box many users would be particularly happy since the 3 minute videos chug quite a bit on my modestly powered laptop. 1080P is a very high resolution after all. 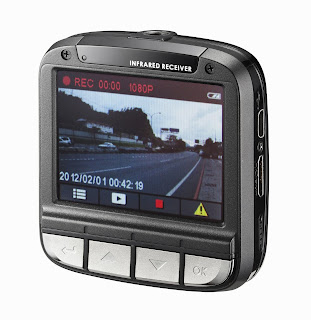 The quality of the footage from the HP Car Camcorder F200 impressed me mightily. I’ve got a couple of dedicated camcorders that shoot in full HD but considering this is a third of the price and mounts in a car, it’s pretty decent. It’s good in all sorts of light conditions and the internal mic isn’t bad either.

The screen might be small (2.4 inches) but it’s pretty clear, although not touch- to be fair you’d probably knock the alignment if it was. The menu system is easy to use anyway. Admittedly you don’t get an inkling of the quality of the footage until you connect the camera to either your laptop via USB or straight to a telly via HDMI but the screen does it’s job.

Are there any things I’m not happy with? Well I personally think the right angle USB cable is upside down- it plugs in from above rather than below. Yes, the instruction manual has a fanciful installation diagram showing you running the cable up the side of the passenger door, along the top of the windscreen under the sun visor and down onto the windscreen and whilst the cable is certainly long enough to do that (and knot itself up) realistically, most people will run it up from the power socket over the central console and on to the windscreen like they would do with a satnav. Talking of satnavs, unless you buy your own adaptor, it’s an either/or scenario, I would have liked to have seen it come with a power splitter in the box but perhaps that’s me being a bit needy. It would be a shame to miss recording the pillock driving into you because you’re off somewhere new and need your satnav.

If you look at the 4 minute video I made, combining daylight and night-time driving, you’ll see how good the results are.

Overall though, those are two fairly minor issues and I think the HP Car Camcorder F200 does a very decent job. I’ve sort of been waiting for someone to fail to give way properly on the King Harry roundabout near us just so I can post the video on YouTube.