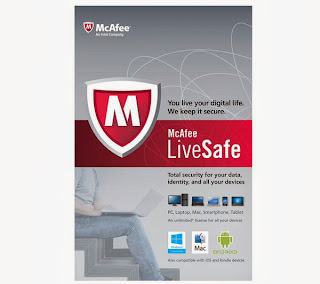 McAfee LiveSafe is McAfee’s answer to what is increasingly a digital world, where an awful lot of what we do and say is controlled by computers. Over the last few years the humble anti-virus package has expanded to encompass new threats and risks and LiveSafe is McAfee’s logical next step in this process.

Rather than simply scanning stuff for viruses, McAfee LiveSafe does a whole lot more, including a could based security locker for copies of important documents, an encrypted password locker, anti-phishing protection, remote lock/wipe/locate functions for smart devices (Android, IOS and Blackberry but not Windows Phone at the moment) among a host of other functions. In fact I had to read the manual quite carefully to confirm it is actually an anti-virus product too because rather than specifically stating this on the box, it simply says “total security for your data, identity, and all your devices” on the box.

Since McAfee is now owned by Intel, there are special optimised functions for Ultrabook owners but since I’m not that rich, I wasn’t able to test them out at all. But given that I’m not stupid and already run anti-virus software on my computers and tablets, the first step in installing McAfee LiveSafe was to uninstall my current protection. Two or more anti-virus software programmes don’t play nicely together at all and if you don’t uninstall the incumbent you could really stuff up your computer.

I personally don’t have any IOS devices (iPad or iPhone) but from reading other reviews from Tots 100 members I’ve noticed they’ve had trouble getting the full suite running. I can’t comment on that but you should probably bear it in mind. Luckily for me, Android devices get the full monty, so that made me happy anyway.

Setting up the software on PC and tablet alike proved very straightforward. As is usual, the “box” contains a credit card sized card with a product registration key to set up an account and register the product. Once you’ve done this, installing the software onto your devices it pretty simple. You can monitor the devices that you’ve got the software installed on from your account on the website. I couldn’t see this overview function on the PC install.

There’s not a great deal that needs to be said about the anti virus aspect of McAfee LiveSafe; they are one of the biggest names in anti-virus software and that aspect does pretty much what it says on the tin. The Personal Locker function was interesting- I normally use SpiderOak, a cloud storage system that encrypts data so that nobody can snoop but the interface is a bit pants. From an usability aspect, Personal Locker does it better but I doubt it’s any more secure in that sense.

The best feature for me was probably the SafeKey function. This automatically remembers passwords and logins for different websites with the caveat that you’re not relying on the browsers autocomplete to do it, which is incredibly unsafe. Apparently it uses government level encryption to keep the saved details safe. Either way, since I have a different password for almost every single site, it was a godsend.

You can also set up age based filters for the kids devices too, which will stop them searching for “boobies”, as one of my work colleagues kids was doing recently.

I’ve only had the software for a week or so now and since I’m reasonably smart in my use of the internet (no, I don’t click on emails that start “Dear Valued Customer”), so I’ve not come across anything

Of course what McAfee LiveSafe offers is an integrated suite, rather than a haphazard mix of different programmes from different suppliers that might not always get along together. And it’s that aspect that’s the real winner here. It’s £15.99 a year and you can buy it here.