Material things don’t particularly excite me. Hard to believe I know, given my gadget lust. But the one thing wifey and I did want to do over Christmas was sort out our Library. No, we don’t live in a Victorian manor house, and we definitely don’t have a Drawing Room or a Smoking Room. What we do have is what started out as a workshop built on the back of our adjoining garage by previous owners. When we had the garage extended and converted into a playroom and utility room, we suddenly had access to this room without going outside for the first time. Unfortunately we’re both hoarders and stuff had to go somewhere. Whenever we did a tidy up, stuff invariably got dumped in this room. At one stage it looked like this: 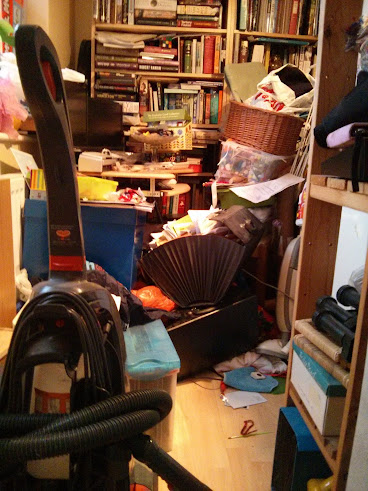 To get anywhere in the room, you had to pick up the thing in front of you and place it behind you to move through. You can’t tell but there is a computer in the back left of the picture.

Wifey has been steeling herself to get rid of some of the clutter and I’m almost as bad. We’re not quite at the level of some of those people on Britain’s Worst Hoarders but we’re not far off. So this holiday has been about throwing stuff away as much as spending time with family in a sense. As we head into a new year we’re looking at a new start with much less clutter. Things aren’t important, being able to get to what we’ve actually got and want to get to is.

Now the room looks like this, without any intervention from Nick Knowles too!

It’s an enormous weight off our minds to be more decluttered and hopefully going forwards it will give us more time to spend with the kids and less opportunity to get hit on the head by things falling out of cupboards, off shelves or from wherever they’ve been balanced. Fingers crossed we can keep it this tidy eh?