There’s nothing more of a faff than lathering up your face first thing in the morning and then scraping it to pieces with a razor. It’s funny that razors seem entirely driven by marketing departments with 37 blades, ultra glide balms, vibrating this, pivoting that and on and on and on.

I’ve never been a fan of shaving full stop but I’ve also never managed to persevere with an electric shaver for any period of time. I got a Philips dohicky when I only really had to shave once a week (thanks Pops) but it made my neck so sore, it was quickly put to the sword. I have an irritating neck in so much as the hairs seem to grow in about 360 different directions and no razor or electric shaver has made the work easy. 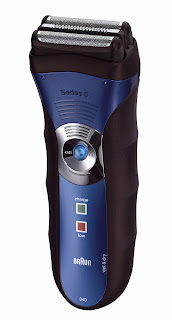 Still, Braun have sent me a Series 3 340 wet and dry shaver to see if they can change my mind. The first thing I had to do, which is typical me, was to pop out and buy a two pin adapter so I could charge the dang thing since we don’t have a shaver adapter in the bathroom any more.

The has a nice chunky feel to it without being too heavy. There’s a sideburn trimmer on the back but mostly it’s all about the twin foil shaver at the top. Firing the shaver up and trimming the old facial hair was reasonably straight forward. It struggled the first time as I had let the whiskers get a little bit too long for the shaver to cope with- long enough to curl away from my face in places. Keeping it short was straight forward once I’d battered the whiskers into submission for the first time.

I did manage to snag a few longer hairs in the whiskers but overall it wasn’t an issue. The twin foils rolled and bumped over the contours of my manly rugged face in a most pleasing fashion. Yes, I don’t have the look of one of those men in those adverts but I also don’t wax my chest like they do.

Part of this turns out to be down to the design of the foils, which are spefically engineered to capture hairs pointing in all sorts of different directions.

Priced at an RRP of £99.99 but currently only £39.99 at Argos, it wont break the bank either and will also keep you pretty clean shaven.

I had to not shave for 3 days and then give the Braun Series 3 340 a go. You can see the results in the video below:

The kids then had to assess the results…