If you missed yesterdays primer, that might be a good place to start you know… 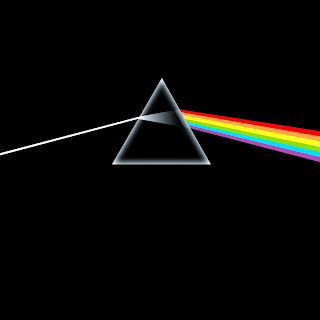 Punk apparently destroyed prog rock in the late 70’s but in 1977, four years after Dark Side of the Moon was released, the album was still the 36th biggest seller in the UK. To this day it’s the 8th largest selling album in the UK, so the lads must have done something right.

In terms of my musical history, I got into Pink Floyd relatively late. I had asked for and received a copy of the Wall on double CD for Christmas sometime in the mid 1980’s but hadn’t listened to it a great deal. I don’t think my ability to listen to music had developed properly when I first listened to it- I could listen to pop and rock quite easily, especially when the songs were 3 or 4 minutes with an obvious verse/chorus structure but switching to progressive rock and a full blown double concept album was obviously a bit much for me. It wasn’t until the Division Bell came out in 1994 that I really began plundering Pink Floyd’s back catalogue and the solo meanderings of the members.

I’ve sworn I’ll only chose one album per artist for this list, otherwise it would be perhaps half full of Pink Floyd albums. This has made it really difficult to chose between the three albums I see as their best: Dark Side of the Moon (the commercially successful behemoth that really tapped into the collective consciousness at the time), Wish You Were Here (the fans choice of best Floyd album and hauntingly beautiful) and The Wall (the double concept album with the notorious Another Brick in the Wall (part II) on it). I could easily argue the case for all three but for the purposes of this list, I’ll go for Dark Side of the Moon as it’s probably the most accessible of them.

For those who don’t know, a concept album, like Dark Side of the Moon, is basically an album strung together by a shared narrative, theme or conceit. There is a bit of argument over what the first concept album was but for the sake of argument, I’ll say it was the Beatles’ Sgt Pepper’s Lonely Hearts Club Band. over the next few years, the concept album really kicked off, with everyone from the Moody Blues to the Kinks and the Who making one, or in the case of the Who, two. I think 1969’s King Crimson’s In the Court of the Crimson King is probably one of my favourites and it’s worth a listen if you’re interested in prog.

Pink Floyd had dabbled with longer songs and thematic approaches to albums for a few years before Dark Side of the Moon came out. Atom Heart Mother, an album with a big picture of a cow on the cover, had a suite of songs called Alan’s Psychedelic Breakfast on it that weighed in at about 13 minutes and that was followed in 1971 with Meddle, an album that gave the second side of it’s disc over entirely to one song called Echoes that weighed in at 23 and a half minutes.

Dark Side of the Moon has nothing like that but all the individual tracks merge into each other and only really work if you listen to the whole album. It’s definitely not one to put on shuffle. The themes of the album revolve around conflict, greed, the passage of time, death, and insanity, all of which had some personal connotation to various members of the group. You’re likely to have heard at least one of the songs, even if it’s only be used as incidental music on a TV programme, since Money has a very familiar ring of cash registers throughout. The album was recorded in the days before much of what we would consider modern technology was available, so the loop of the ringing tills was done by cutting and splicing together multiple copies of the tape. The amount of work that went into something as simple as that, something that would take about 20 seconds on a computer today, is mind boggling.

I started buying CDs at probably the worst time possible in the early/mid 1990’s. Most CDs at that time were quite shoddy transfers from analogue across to digital, complete with hiss, and lack of depth to the sound. Infamously I remember a friend commenting when Led Zepplins 4 Symbols album was remastered that John Bonham’s drumming on When the Levee Breaks didn’t sound like someone sitting at the bottom of a Welsh well banging on up turned paint cans any more. And it was pretty much like this across the board, Pink Floyd’s 70’s output was no different. To this end I now own about 3 different CD versions of Dark Side of the Moon, and as the remastering has progressed, so has the quality of what I’m listening to the album on, and consequently I am still hearing new things almost every time I put the album on. The AKG K545s give a wonderfully neutral sound, something pleasant in the bass obsessed world of headphones. That’s not to say the bass is weak, the thundering bass line at the start of Time is majestic, but it doesn’t overwhelm the sound. A lot of the background vocal snippets are very much clearer than they’ve ever been to me too.

My personal favourite track is probably Time. It effortlessly blends a melancholy sound with lyrics that perfectly mirror the passage of time, even quoting from Auden in the process:

Cheery isn’t it? But sometimes you don’t want cheery and for those times there is Darkside of the Moon, an all time classic.