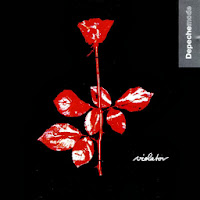 Back in 1990 I still read Q magazine avidly. I’d often spend what pennies I had left after fueling my videogame addiction on a 5 star album from the latest issue and one of those happened to be Depeche Mode’s Violator. Like many, I was lead to the album but the stand out single, Enjoy the Silence, a song, to my shame that my better half can still beat me at on Sing! on the Xbox.

I’m no huge fan of Depeche Mode generally, I have their greatest hits albums but this is the only studio album I actually bought. It’s a very dark and menacing album, shorn of most of the poppy dance sensibilities of their earlier stuff, despite the band apparently being rather unwittingly huge in the US techno scene at the time.

Violator is an album that exists pretty much because of drugs. Gore, the bands main songwriter, was, like the rest of the group, taking an awful lot of Ecstasy at the time, and a lot of the doom and gloom is invoked by the crash of coming down from taking it. Likewise Clean details David Gahn’s heroin addiction. Cheery isn’t it? In fact I remember reading at the time of the albums release that Primal Scream, a legendary good time band, actually went cold turkey after touring with Depeche Mode because they were terrified by the amount of stuff the boys were ingesting. Whether that’s true or not I don’t know but it certainly contextualises the album well.

Listening to it on the AKG K545s brought out a lot of detail I’d not noticed back in the day. This was an album I originally purchased on tape and later upgraded to CD but shoving a high octane fuel in a jalopy wont make it a super car, and listening to a CD is a mediocre stereo system is pretty much the same. The bass was powerful without dominating the sound like it does with a lot of those expensive fashion headphones. Listening to the album in the dark with the rain lashing against the window was extremely atmospheric.

Stand out tracks include Personal Jesus, World in My Eyes, Enjoy the Silence and Policy of Truth. If that’s almost half the album, that’s a pretty good indicator of how good Violator actually is.