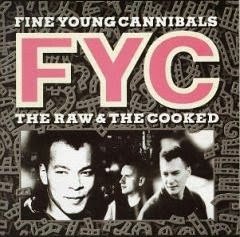 Named after a book by French anthropologist Claude Lévi-Strauss, The Fine Young Cannibals second (and more or less last) studio album was released in 1989 to almost universal praise, hitting the giddy heights of number 1 on the Billboard top 200 album chart.

It has a couple of other unique claims to fame too, it was the first studio album I ever bought on cassette (after I’d purchased Hey Hey, it’s the Monkees Greatest Hits)  and it contains the only known song that Jools Holland hasn’t comprehensively ruined with boogie woogie piano in the form of Good Thing.

I’d heard FYC on Top of the Pops with the big hit off their first album, Johnny Come Home, and whilst I liked the music, a rather distinctive blend of pop and ska, I had reservations about singer Roland Gift’s vocal style, which was quite a high falsetto (I think that’s the right term), but the first couple of singles off of The Raw and the Cooked were too good to miss out on.

Listening to The Raw & the Cooked now, the first thing that strikes me is how much guitar, drum and just pure noise there is on this album. If you’ve got the volume up, Good Thing will almost certainly catch you out with it’s loudness, and the opener She Drives Me Crazy is full of crunchy guitar noise. It’s an album that is full of the joys of life, played quickly, with all bar I’m Not the Man I Used to Be weighing in under 4 minutes. It’s a catchy ska pop fusion, with the pop being at the rockier guitar end of the spectrum to the usual late 80’s electronic sound. I genuinely can’t pick any songs out as stand out on this album, they’re all great and to my mind this is one of the undiscovered classics of the 80’s. It’s a shame that the band didn’t build on the success but it’s a great high to go out on.

Listening to The Raw & The Cooked on the AKG K545s has made it sound even better, especially compared to the Sanyo portable tape player I used in have back in the day. I can even hear Jools Holland’s boogie woogie piano on Good Thing clearly enough to recognise it as Jools Holland’s boogie woogie piano, which I never could back in then. Or even a few weeks ago when I tentatively began auditioning albums for this series via my phone and a pair of pretty decent MEElectronics HT-21 on ear headphones. The K545s are the first over the ear phones I’ve used since a huge ponderous pair of Panasonics my Dad had in the early 90’s. The K545s are light and comfortable to wear but deliver such a sound it’s like being there. yes, they do show up inherent weaknesses in the recording process if there are any, and I’ve heard a lot more “1-2-3” count ins that I’ve ever noticed (generally, not particularly on this album I should say).

I do remember critics at the time being unimpressed with the Elvis cover, Ever Fallen in Love, but I think it’s a particularly fitting end to the album. If really pushed, I’d have to say Don’t Look Back is my favourite track, purely because I like the lyrics- musically I don’t think it’s any better than the rest.