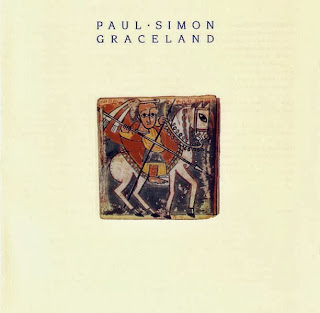 There weren’t many musical queues I took from my parents but a bit of love for Simon & Garfunkel was one of them. Subsequently I’ve been a bit unimpressed with Paul Simon’s solo work from the 70’s and early 80’s when I checked it out. There are some individually good tracks like Me and Julio Down by the Schoolyard and Fifty Ways to Leave Your Lover but more or less everything between the end of Simon & Garfunkel and Graceland isn’t really my cup of tea. At the time there was a fair amount of controversy over Graceland as Simon had traveled to apartheid era South Africa to record with African musicians and he was felt to have broken the cultural embargo on the incumbent regime. This all went well over my head as an 11 year old though, and I remember loving the album as soon as my Dad put it on. Paul Simon has always been an extremely gifted lyracist, even if on occasion his lyrics don’t particularly make sense- he often picks words of phrases because of the feeling or mood they evoke or how the work together rather than for any literally sense. For example, in the albums stand out hit, and the solo Paul Simon song most people are likely to know, You can call me Al, there’s a line, “He sees angels in the architecture, Spinning in infinity..” Lovely line, not much relevance to the rest of the song. Even the names Al and Betty in the song have been speculated to death, some people reference Dante, some the Betty Ford clinic. Who knows, it just sounds right.

I don’t know what’s more impressive with Graceland, the effortless ease that the songs carry themselves off with, something few people aside from Jack Johnson seem to manage today, or the fact he wrote the album after his break up with Princess Leia Carrie Fisher. Quite what a bloke in his mid 40’s had been doing married to an actress in her late 20’s is anyone’s guess but I suppose the Jabba Sailbarge outfit she wore in Return of the Jedi might have had something to do with it. Along with his prodigious bank balance.

The thing I like about this album through the AKG K545s is how neutral the headphones interpretation of the album is. The bass isn’t excessive but it is full and rounded, something that is important given the amount of drumming. It makes me want to dig out the follow up album, Rhythm of the Saints, which is even more drum lead.

Subsequently loads of musicians have buggered off overseas and successfully ripped off worked with local musicians from exotic foreign parts. Jimmy Page and Robert Plant (the better known half of Led Zeppelin) did it on their No Quarter album, which was excellent in all it’s hurdy-gurdy-influenced pomp. But whether it’s Graceland, The Boy in the Bubble, or the haunting Homeless, it’s seldom done as well as Paul Simon did with the ever so wonderful Graceland album.