Following a successful nationwide tour, including a one-month summer season at Regent’s Park Open Air Theatre, Dinosaur Zoo headed to London’s West End for a Christmas run at the Phoenix Theatre, until 12 January 2014 and a couple of weeks ago we were invited to the theatre to see some dinosaurs.

Unfortunately some of the family weren’t very well so in the end it turned out to be just the boy and me. Unfortunate for the rest of them but fortunate for us because we had a very good time. 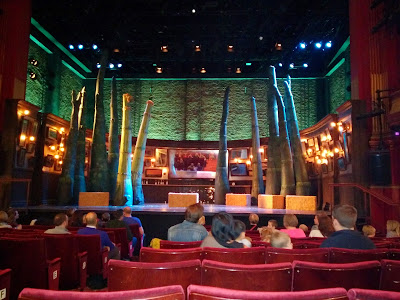 Dinosaur Zoo is a 50 minute interactive puppet show with a bonkers Aussie who is very much a cross between Steve Irwin and David Bellamy. He’s engaging and talks us through all the featured dinosaurs, some of which are peculiar to the landmass that used to occupy Australia. Since the show isn’t overly long, there are only about half a dozen dinosaurs to see but it certainly made me reappraise what you can achieve with puppets. Even the smaller dinosaurs which were obviously just nestling in someone’s arms like emu with Rod Hulls arm up his bottom looked unbelievably life like. The bigger dinosaurs are even more impressive.
Tickets are £14 to £21 but there’s an obligatory £3 booking fee if you do it online. In terms of value for money the experience is great, especially if you pay the premium to sit in the “Danger Zone” and get menaced by the dinosaurs but it’s not an overly long show and definitely not worth visiting from outside London unless you’ve got other things planned for the day. Personally coupled with a trip to the British Museum which is about a 15 minute walk away, it worked out brilliantly.