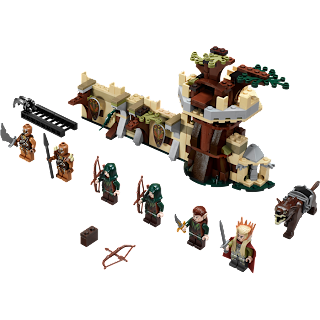 The boy is almost 7 and already a big fan of the Hobbit. It will no doubt confuse him tremendously when he reads the book, let alone when I force him to play the old Spectrum text based adventure game but he is enjoying the films a lot.

I think the Hobbit films are a bit friendlier for kids than Lord of the Rings, fitting given the source material (the Hobbit was and is a kids book whilst the Lord of the Rings is for grown ups), and that lends itself well to the Lego sets. The Mirkwood Elf Army set is one of the more affordable in the range at £29.99, against the big top end sents at £79.99 but doesn’t contain any of the main protagonists. And by that I mean any of the Dwarves, Gandalf or Bilbo.

What you do get is an Elf fortress and a lot of figures. You don’t normally get this many figures with sets of this size, so that was pretty good. Once the set had been built, the boy had plenty of role playing with the Elves discussing battle strategies and defending their fort. All in all it took him about 45 minutes to build with minimal help from me, so it’s a good set for younger kids, especially those who have seen the films. Having said that, I should have perhaps let him start building it slightly more than 45 minutes before we had to leave for the Christmas panto…

The Hobbit: The Desolation of Smaug is out at cinemas now and I can well imagine that some related Lego will be making its way into plenty of kids Christmas stockings. 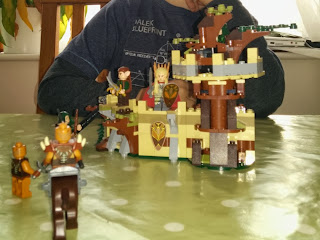