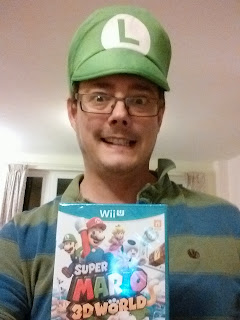 I love a bit of Mario, I have done ever since the SNES days back in the 90’s but nowadays, as the game title suggests it’s all 3D now. This is where the Wii U really delivers because it’s got the extra oompf that the Wii didn’t.

Mario has come a long way in 3D since his first foray into it on the N64 but Super Mario World 3D has a lot of the feel of that classic. A Nintendo console without a really great Mario game is always a bit odd, and this is really the game that should have been released when the console launched. I’ve played some great Wii U games, like LEGO City Undercover and The Wonderful 101 but nothing really says Nintendo console like a proper Mario game.

Super Mario 3D World is a 3D platform game that up to 4 players can play simultaneously. One of the things it does brilliantly is deal with “off the screen moments”, when the most advanced player basically scrolls the rest of the players off the screen. In some games it will cost you a life when this happens, or the scrolling will stop and it’s just a pain in the backside. Mario however just pops characters off screen in a bubble with no further problem. This came in rather handy playing with the kids because they’re 6,4 and almost 2 and I’m 38 and I’m pretty good at videogames.

Mario games are never easy and after the first few levels Super Mario 3D World does get really tricky. Fortunately there is a built in mechanism to make things a little easier. If you fail a particular section a lot times you get a special power up that makes you indestructible for a bit. You can still die if you fall off the bottom of the screen but it does make it a lot easier and stops crushing frustration setting in too often.

There are some really neat touches in the game that help to notch up the immersion level. On some levels the tilt sensor in the gamepad is crucial to getting through the level, and on one particular level that really captured the kids imagination which involved blowing on the gamepad (it has a microphone in it) to make a fan blow and raise a platform. It’s little touches like this that mark out a Mario game from the crowd and I have to say we’re in love.

There is a plot, rescuing some pixie fairy things that baddie Bowser has captured but it doesn’t get in the way too much and even Fifi was pleased to be able to use Princess Peach as her character. Each of the 4 controllable characters has different attributes but they’re not so different you have to worry overly over who you choose.

Super Mario 3D World is out now and is THE must have game on the Wii U.