Back in the early 1980’s when home computers were only just becoming affordable, my Dad bought a 16K rubber keyboard Sinclair ZX Spectrum. The world (for me at least) was never the same after that and I can’t over estimate the influence it had on me. A lot of people I chat to on Twitter or who read my blog think I work in IT; I don’t I’m an accountant but that computer set me on the way to being a computer fan for life, and it shows pretty much in everything I do to this day.

I still remember vaguely the instance that stopped me becoming one of the early bedroom coders who would eventually turn their hobbies into big business, like the Darling Brothers who went on to found Codemasters for example. I was typing out a game listing in the back of a magazine, probably Your Sinclair or Sinclair User, I forget which, and when I reached the end I stupidly typed “RUN”. I’d typed something in wrong and the machine reset, losing the hours of hand typed code in one foul swoop. That was it, aside from the odd foray into Penis based shooters as a teenager with the Shoot’Em Up Construction Kit, it was PLAYING rather than MAKING games for me from thereon in.

Last year a bunch of clever bods set about trying to change this in terms of a combination of hardware and software that could be bought cheaply and could be used by anybody. The hardware was called the Raspberry Pi, a small bare board computer than could run a version of the free Linux operating system and was initially aimed at techies and schools. The techies won the day and started ported media centre software to the Pi and a lot of other users found it a bit daunting. Some of the early operating systems didn’t even boot to a GUI (graphical user interface, or basically a desktop) but instead booted to a command line that no doubt baffled ITC teachers country wide.

Now however the software has matured and companies are offering bundles that include the Pi, an SD card preloaded with easy to set up operating systems that include software for starting on the road to becoming a programmer. At last, my thwarted childhood dreams could become realised! 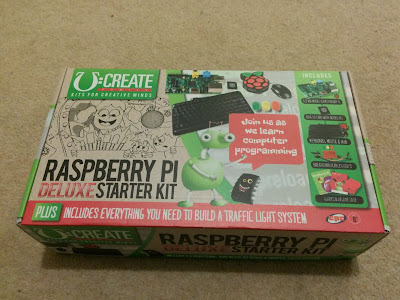 Within the box there is a 512MB Raspberry Pi, a deluxe case, keyboard, mouse, SD card and cables, as well as tutorials to guide young children through projects in a way that is jargon free, educational and fun. For kids read anyone, me included. The case takes a bit of screwing together, and isn’t something I’d advise the children do themselves to be honest but even before you’ve taken a screwdriver to the case, you’ve got quite a lot of bits and bobs in the box: 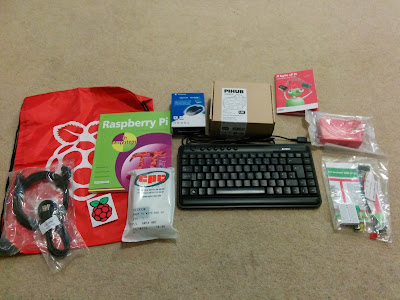 One of the most important programmes pre-installed on the OS is called Scratch. This is a game creation suite developed by MIT for 8-16 year olds to learn how to design games. I’ve only begun, with help from the kids, to get to grips with this but I can already see that for kids within the right age bracket this could be exceptional.

The package costs £99 for everything you see in the picture, which includes a HDMI cable, making it a cheap and ideal way to get a computer for your child. If you have a flat screen telly, the chances are it already has a HDMI connector spare, so it shouldn’t be a problem connecting it up. The keyboard and mouse are of good quality and the case looks properly dinky: 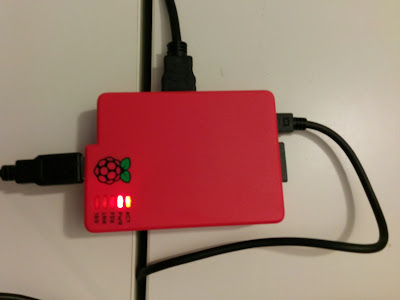 I have to admit it did seem pretty cool using something so small hooked up to our 50 inch plasma screen telly and even though I’ve not really done much Pi related other than installing XBMC onto one I had on preoder, it was simplicity to set up as I’ve said: 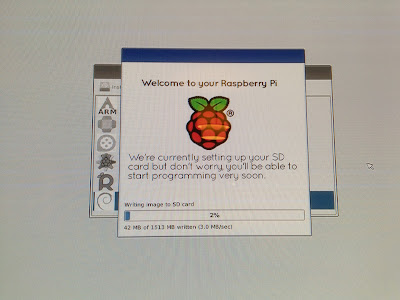 I just followed the onscreen prompts and it did the rest.
If you think your kids might be interested in more than just playing games or you yourself fancy a bit of tinkering, this is an excellent place to start.
The U:Create Family pack is available online from CPC here