The whole concept of gravity is both simple (you drop something it falls) and complex ( the general theory of relativity describes gravity as the consequence of the curvature of spacetime governing the motion of inertial objects, and that’s before we get started on quantum gravity-eek!) but that doesn’t seem to bother small children, they write their own laws governing how things work.

Fifi for example will experience sudden bouts of extreme gravity where she will just fall in a heap on the floor at any given time, usually wailing loudly. This gravitational phenomenon usually ties in with some sort of “not-getting-her-own-way” incident. 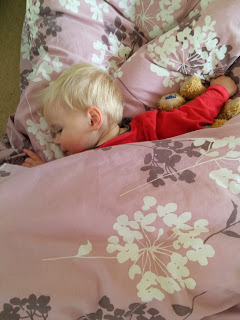 Ned however has really made gravity his own. Like his sister used to be, he is a completely lousy sleeper. He’s not quite two yet but often wifey (and occasionally I) end up in his bed of a night, or he comes into ours at some point. This morning after a night of being poked and prodded, wifey bought him into our room at about 5.30am in the vain hope that he’d poke and prod me a bit so she could get a modicum of rest. It was at this point that little Ned once more exerted his strange skill for sideways gravity. Laying next to him in bed, I felt on the verge of being pushed out because a small boy was pressed really hard up against me but to look at him, he wasn’t putting in any sort of effort at all, he was simply laying there himself. It was as though the weight of him was falling sideways into me.

After some time experiencing this phenomenon, I decided to get up and sure enough the little blighter almost fell out of the bed. I’ve been pondering it for the last hour or so and have decided it may classify as a super power and consequently I’ve fired off an email to Marvel asking if they want to turn him into the newest comic superhero. I felt that I’ve got no choice in this really because what would happen if independently Marvel, DC, Image or someone came up with a gravity manipulating two year old? Ned would be in breach of copyright and might get sued or something.

So there you have it, expect issue 1 of Gravity Boy on the shelves soon, and perhaps a good nights sleep for our household at some point further down the line when fame and fortune (and scientific debunking) has occurred.