As part of my dry January that Brita have challenged me to, we’ve had a look at de-stressing and relaxing. I must admit in normal circumstances I tend to reach for an ice cold bottle of beer and my Chillsner and allow the chilly wonderfulness of lager to relax me. Obviously this isn’t particularly good for me and over time I imagine it will turn me into a red nosed sot similar to Sir Alex of Ferguson.

There are of course other ways to relax from the general stress of life and with a little bit of help from Brita, we found out exactly what this was like last weekend. Now with the kids being aged 6,5 and 2 (the oldest two are 21 months apart, it just temporarily looks much worse than it is), we haven’t managed a night away together without some form of child since the eldest was born, or technically I suppose 9 months before that. Certainly not this decade at any rate. So when Brita suggested we spend a night at the Grove and have a restful night in a bed without a child or getting up 37 times to change nappies, give milk, change bedding or anything, followed by a nice relaxing massage the next morning, we weren’t exactly about to say “no” were we?

I managed to build up some stress during the day time on Friday, wondering how the heck I was going to get all my work done. Fortunately wifey dropped the kids off round my wonderful sister in law’s while I was still at work, so I didn’t have to cope with all the grief and sobbing that would have inevitably ensued. No, I got that the night before. Fifi burst into inconsolable sobbing when I told her we were going away for a night, unable to even articulate her “grief”. The boy however was able to explain in length with several digressions, why this was an utter betrayal of all he believed in. Bless.

In the last 6 and a half years of parenthood, we have managed to go out together about 5 or 6 times. Most of the time it’s been an indigestion inducing run around for anniversary meals or the theatre, followed by a dash home. It’s nobodies fault really- when the boy was little (from a couple of months) he used to breath hold until he went blue and passed out. Passing out was the only thing that would start him breathing again. It was terrifying and obviously we didn’t want to leave him with anyone because it wasn’t fair on them. When Fifi came along, she didn’t sleep. She didn’t sleep through until she was two and a half and when she did, she was up for the day at around 4am. Ned’s heading the same way, he’s two now and is still up at least once most nights. It’s exhausting and definitely not conducive for a good nights kip or a relaxing evening in for that matter.

Fortunately for me the Grove obviously wasn’t high on Three UK’s list of country hotels to provide mobile coverage in, so I was safe from any potential disaster and if things were that bad, a call to reception would have probably got hold of us.

We had a lovely dinner together and almost managed to not discuss the children endlessly. The Glasshouse restuarant at the Grove is sort of like a gourmet buffet- there are several stations with ready to eat food to self serve but if you fancy, like I did, some roast beef a bit pinker than what was on offer, you can ask and it shall be given unto you (alleluia!). Wifey may have had a couple of glasses of wine but I was good and stuck to the sparkling mineral water. It was nice to have a big meal and still feel mentally sharp, although since we sat down to eat at about 7.45, by the time we finished at around ten past nine, we were both properly knackered so we retired to our room for a nice game of Scrabble.

A night of blissful, uninterrupted sleep took us up to 9.50am the next morning! I don’t think either of us have slept that late without illness since before the kids were born. In fact when we were tucking in to our breakfast after a nice bath, it reminded me of how we used to get up outrageously late on a Sunday and stroll down into town for brunch.

The breakfast set us up nicely for a morning down the spa but not in the way you’d necessarily think. It’s seldom at meal times we get to eat a meal without making about 15 additional trips to the kitchen, for spoons, additional cutlery, clothes, sauce, more water or something. It’s stressful and usually ends up with a congealed cold mess on a plate being shovelled down in a few gulps before Ned covers the curtains in yoghurt or something. So to be faced with a plate like this:

Was good but to be able to eat all of it slowly in one go without getting up from the table was truly marvellous.
But the point of the trip itself was a trip to the spa for a nice relaxing massage. This was my first ever massage so initially there was some considerable worry on my part. Like when the masseuse left the room saying, “put your robe on the chair and get on the table under the towel.” I stood there paralysed in terror, unable to work out whether she meant just the robe or the robe and swimming trunks. On the one hand she hadn’t said the trunks, on the other why would I need a towel for modesty if I was meant to leave my trunks on? I had to do something, and quick, because she’d already tapped on the door. Galvanised into action, I opted for entirely au natural, whispered a silent prayer that I wouldn’t have to explain to wifey why I’d been arrested for indecent exposure and put the rather small towel over me. Fortunately I had guessed right and didn’t end up in the back of a squad car in a blue paper suit or anything and I was finally able to properly relax. Even the pan pipe music didn’t distract from a great massage. There’s nothing like laying face down with your mouth poking through a hole so you can breath while someone pummels the muscles in your neck and shoulder to the point where it hurts but in a good way and you feel your shoulders un-hunching for the first time in months. It was glorious.
Working out the price of the massage (it’s not a cheap spa and oddly men are a fiver cheaper than women despite having less surface area), it only equated to about a months worth of alcohol for the pair of us, and was a lot more relaxing. I felt like Manny in Black Books after he absorbed the Little Book of Calm and floated around like a Zen Buddhist. 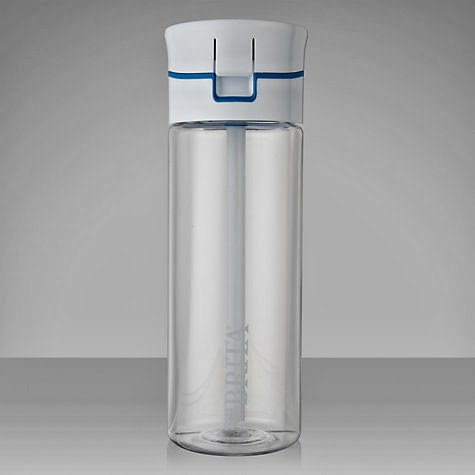 The masseuse told us to drink lots after our massage (she then tried to sell me lots of the massage oils but I was blissed out on pan pipe music and floaty massage stuff and didn’t really take it in), so fortunately I was able to whip out my Brita Fill & Go water bottle and glug down over half a litre of water. Funny how lying still for just under an hour could be so dehydrating.

We pootled around for a while afterwards (ie three hours) and then went to pick the kids up. I was so relaxed, I was even able to stand in Tesco for half an hour while the boy pondered which particular set of LEGO to buy. That sort of wait usually has me wanting to commit murder most horrid.

I don’t think I’ve felt that relaxed without the intervention of some ambient trance music (Orbital or Future Sounds of London level of ambient at that) in a very long time. Cheers Brita.