I’ve been an on and off reader of American comics since my youth. You know, the Marvel/DC stuff that seems to dominate the summer cinema now days. Superman, Spider-Man (the hyphen is important you know), the X-Men, Green Lantern and of course Iron Man and the Avengers. When I was little- 7 or 8, it was only individual issues taken in isolation and then only when the Beano had sold out and I wanted a comic anyway. The first ones I remember reading were Marvel’s Dracula, an Iron Fist comic, a bit of Daredevil, some Ghost Rider and a really obscure comic called WARP!.

Comics were a lot more episodic back then, if you were unlucky a story might stretch across three or 4 issues but even if it did, as the purchaser of a one off, you would get a good summary of what had gone before over the first page or two.

Whilst it’s true there were comparatively few strong female characters back then, and those there were tended to be clad in extremely tight spandex, there was less sexualisation of women than there is now. You only have to take a look through the exceptional Hawkeye Initiative website to see how bad it really is. The aim of that project is to take provocatively drawn female heroes and substitute them for Hawkeye, to highlight how ridiculous the poses female characters are put in.

It does make buying comics for the kids quite difficult. Both Marvel and DC do a kids comic range, aimed at the 4-7 market, but there isn’t really anything between this and the adult end of things as far as I can see. It’s not just the sex either, the content is quite brutal in some instances. Yes, that’s nothing new I suppose, Watchmen was full of rape and bone breaking violence in the mid ’80s but that was such a hit because it was so different from everything else.

It came to a head last week when wifey picked up a copy of Tony Stark: Director of Shield in a library sale for the grand sum of 10p. The boy likes the Avenger and Iron Man cartoons on the telly aimed at kids, so she thought she’d buy it. Fortunately she asked me first. I like my Iron Man, and knowing that there is a history of alcoholism and womanising in the title, I said I should have a look first before letting the boy have it. Glad I did because whilst there was little or no sex, there was the small thing of a dead body exploding and the persons innards strangling and killing lots of people. It was like something out of Reanimator, and not in a good way.

And then there’s the bizarre concept of the “boob window“. It’s not a phrase I’d ever come across, despite reading literally 1,000s of comics over the year, but someone mentioned it in a comment on an article about underrated film adaptation of comics, so I had to google it (it had nothing to do with the use of the word boob, honest). It turns out that skin tight painted on costumes aren’t really enough for super heroines, they need to have a boob window cut into their costumes. 1970’s hero Power Girl had one for years, they got rid of it, there was fan outrage and now it’s back.

How exceptionally odd. It’s not like you see Superman saving the day in a mankini is it?

In the last 30 years since I began reading comics, the art work and publishing have come on in leaps and bounds. Back in the day, the cover was colour but pretty much all the titles I read were either black and white or very pixelated colour. Today everything is full colour and really well drawn, as Powergirl and her boob window to the left show. 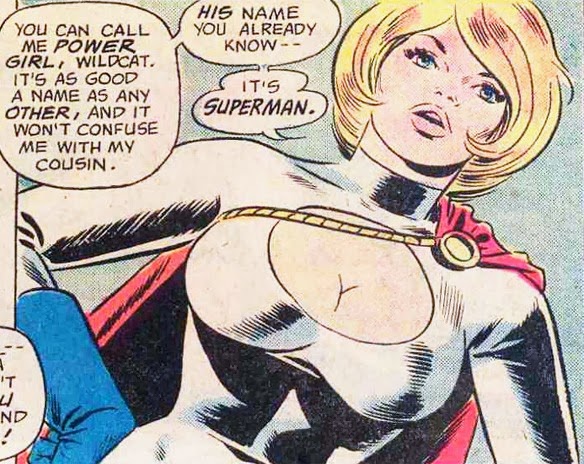 I should point out, she had the boob window back in the 70’s and her proportions weren’t particularly different but even so, it’s all a bit strange really isn’t it? Especially considering she was supposed to be a bit of a radical feminist character at the time. Much like Blade was when Marvel introduced him as the first black superhero on their rosta, she was an attempt to shake stuff up. Blade obviously didn’t have a boob window either.

So, having avoided splattering innards and excessive cleavage, what does the boy have in store? I’m afraid he’s on a diet of Tintin, Asterix and some of my old (boring) black and white Marvel Essentials at the moment. Are there any comics you’d recommend for a 7 year old obsessed with superheroes?