So we’ve been trundling around for a week now in the all new Nissan Note. Yes, all five of us have managed to get into the car, with a McLaren XT in the boot. The Note is TARDIS like with regards to it’s inside space but fortunately much like an ordinary car when it comes to driving.

When I first saw the actual dimensions of the car I was slightly sceptical about getting everybody in it- this was problematic as the production crew had already been there an hour and we were definitely running with it for the 2 weeks. Fortunately I needn’t have worried. Our 3 car seats (for a 2, 5 and 6 year old) fitted in the back with minimal jigging around and we didn’t have an issue shutting the doors either. Score: 1 to the Note, although I will admit to having to take my watch off to plug the safety belts in for our two older kids as the gap between their seats wasn’t sufficient for my watch wearing wrist to get through.

Modern engines are incredibly clever, I recently saw a cut away of a VW 1.4 TSI engine and was suitably impressed. I’m equally impressed with the 1.2 litre normally aspirated engine Nissan have put in the Note. Although they do a super charged version that ups the power to 98PS, the 80PS in the 1.2 is sufficient as a runaround. In fact, it’s not too shabby on the 40-60mph acceleration. Relatively of course- it does have a 0-60 of 13.7 seconds, which isn’t quick by any stretch of the imagination. 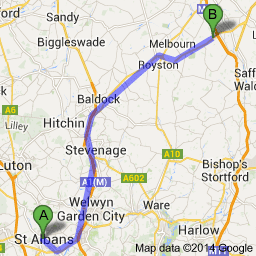 Over the weekend we took the Note up to Duxford to see some planes. It was a fairly long trip, especially given the text message I received while we were there reminding me that it was my mum’s birthday. We diverted to Hoddesdon on the way back to pretend we hadn’t forgotten. Whoops!

This was our first real motorway drive in the Note and it handled it well. There seems to be some sort of underlying thought that you need at least a 1.8L engine to do any sort of motorway driving in a family car now- we were reproached for getting our 1.6 Zafira because it “wouldn’t be good on long journeys with such a small engine.” That sort of thought is hogwash to be honest. When I was a student in the mid 90’s my trusty 1.0L Nova took me all the way up to Lancaster from the home counties with no issue and engines are a lot more advanced now. There is more road noise than we get in our other car but I suspect this has to do with overall weight- a lighter car needs a less powerful engine. We happily cruised at 70mph on the motorway stretches of the A1 at under 4,000rpm anyway.

We had an ace time running about Duxford, which is brilliant for children as the site is huge, with wide open spaces between the hangars that let the kids burn off some excess energy. We even had lunch there which the kids loved.

When it came time to leave (in a hurry to get to my parents) I was nicely surprised by the way the auto headlights just worked. I’d forgotten that there was a setting for automatic sensing headlights so I didn’t even have to twiddle the stork. Which was nice.

Nissan have lent us a Note for a couple of weeks. It’s good fun.