Listening to Radio 5 Live this morning on the way in to work, it seems the furore over in game (commonly known as in app on tablets) purchases has once more reared it’s head as some kids have racked up big bills buying virtual trading cards in an EA FIFA game.

The concept behind in game purchases hinges around the idea of monetising gamers after the purchase of the game, usually via the medium of microtransactions– small amounts most gamers wont think twice about spending to get something to help their progression slightly. One of the most famous instances of this was the $2.50 players had to pay for horse armour in the game The Elder Scrolls IV: Oblivion. This was back in 2006; the idea of these in game transactions are nothing new. There has been widespread criticism of game publishers stripping content from games so they can effectively charge for it twice by charging a premium for downloadable content (DLC) which should effectively have been in the game to start with, as well as charging what can often be a massive premium for objects to make the game more interesting or easier.

When tablets, notably the iPad and latterly Android devices, started to become popular, the model for in app purchases evolved. Apples IOS system is a closed system and Apple like all transactions to go through their store so they get a cut of the profits but they do allow in app purchases in games on their store. There are now an awful lot of apps that come under the Freemium banner. These games are nominally “free to play” but unless you like spending hours and hours grinding your way through the game or are particularly dexterous, you’ll end up being tempted to buy upgrades in the game that often work out much more expensive than simply buying a game in the first place. Perhaps the most famous example of this is Candy Crush.

You don’t need to look far to see how badly this has affected people, a simple Google will show you, and we had an example the other day when the 6 year old bought the iPad to me and complained he couldn’t buy some crystals that he desperately needed in a game he was playing. The price of the crystals? They ranged from £1.79 to a whopping £70. That’s right, £70. At that level this sort of in app purchase isn’t aimed at monetising gamers, it’s aimed at exploiting people who let their kids use their iPad/iPhone without making sure the settings stop this sort of automatic purchase. Fortunately there are things you can do to stop this happening.

On Apple devices there are two things you should do. Firstly you can change how long an entered password is valid for. Purchases from the app store require a password to be entered but the default setting leaves the account logged in and able to make additional purchases or in app purchases for the next 15 minutes. To change this to an immediate expiry, do the following:

1. Touch the Settings icon on your iOS device

2. Touch the General option on the settings screen

3. Touch Enable Restrictions from the top of the screen.

4. If you haven’t done it already, create a 4-digit code to prevent your kids disabling the restrictions that you’re about to set.

This is perhaps the most important thing to do since if a child asks you to put a game on the device and you do so, they then have a 15 minute window to spend as much as they (or the game developers) want in game. 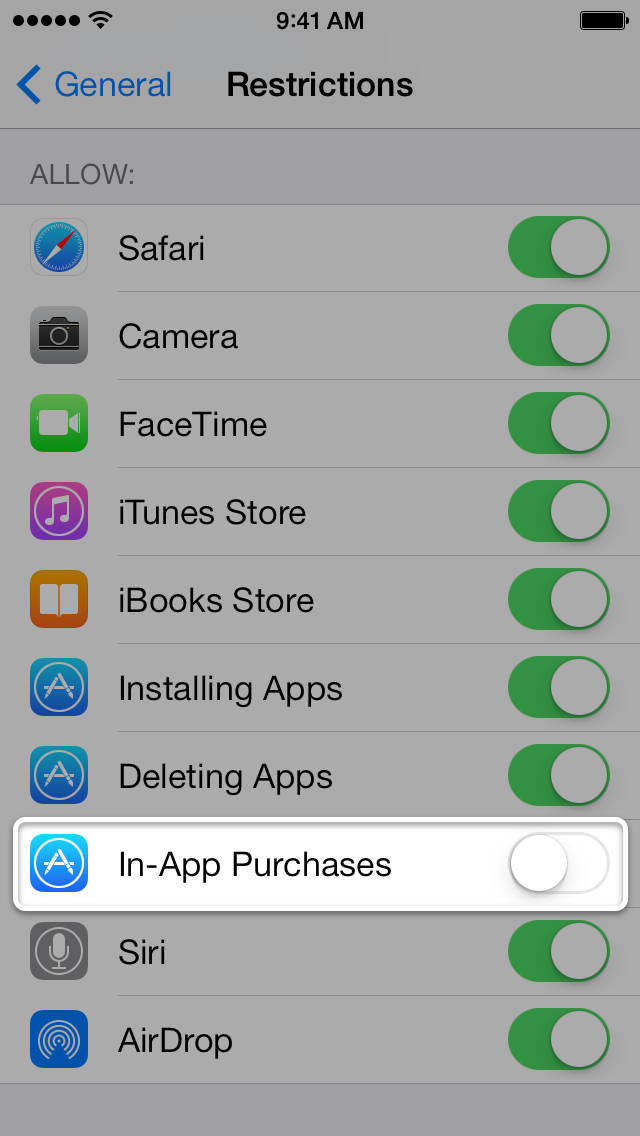 Secondly you can completely disable in app purchases:

1. Touch the Settings icon on your iOS device

2. Touch the General option on the settings screen

3. Touch Enable Restrictions from the top of the screen.

4. If you haven’t done it already, create a 4-digit code to prevent your kids disabling the restrictions that you’re about to set.

5. Scroll down to the Allowed Content section towards the bottom of the Restrictions page and turn the In-app Purchases toggle to the OFF position. 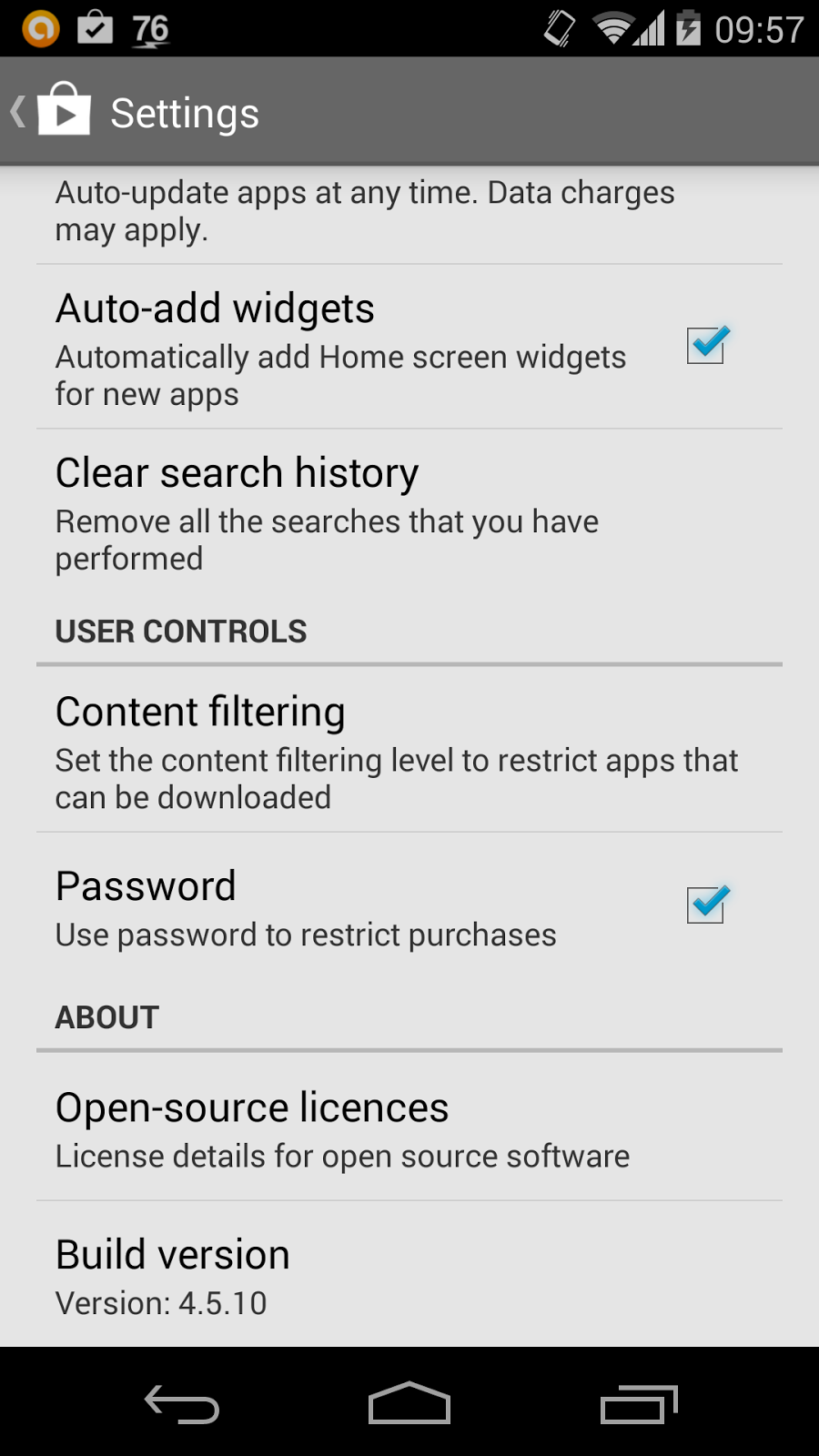 If you have an Android device, and many people do as they’re cheaper than Apples products, it is also possible to turn off in app purchases by effectively requiring a pin to make purchases. Unlike Apple, it’s also possible to set up an Android account without attaching a method of payment, so if it’s an account for one of your kids (and newer versions of Android allow multiple accounts on a single device), it’s worth bearing this in mind. However setting up restrictions is a little more simplistic in Android.  Simply open the Play Store app on the device, select settings from the top right drop down menu, and under user controls you will find the option to require the password to make purchases.

In terms of older kids using consoles like the Xbox or Playstation, there is again no need to assign a card against the account. Both online ecosystems allow for purchase of good using virtual points that can be bought on cards. This is an effective way of limiting the amount that kids can spend in game or downloading content on a console.

Basically the most prudent view is if my card details are stored on the system, what have I done to ensure my money isn’t being spent by my kids? If you assume that by default you’ll be bankrupted by the purchase of collars for kittens, bubblebath for washing puppies and crystals to power something or other, that should give you the impetus to make sure it can’t happen.