We don’t watch a great deal of kids telly any more because i) I can’t stand it and ii) I can’t stand it. To paraphrase an old Red Dwarf joke, I realise that technically that is the same point but I felt it was so important I had to make it twice.

In order to stop Ned descending to the bowels of the house and stealing at the remote controls, we tempted him to stay in bed with us on Saturday morning and watch a bit of Milkshake on C5. Sadly Jen wasn’t presenting it though.

First of we saw an episode of Norway’s finest. Scandinavia might be great at producing gritty crime dramas but they’re also the kings of anthropomorphism. Monkeys, elephants, even scooters and vehicles are happily chatting to humans in this pre schoolers animation. At one point I even saw the monkey call for the elephant and fire truck to rescue a ball stuck up a tree. That’s right a monkey stood right by a tree and called for someone with a turntable ladder to get a ball down from it. The monkey, as you can see from the picture doesn’t even have shoes on, you know, to make climbing easier. Perhaps he was just taking the piss. What was funny though was the monkey had a pet dog. The dog seemed to have the short end of the straw, in as much as even inanimate objects were anthropomorphic but the poor pooch was left running around on all fours barking and panting. 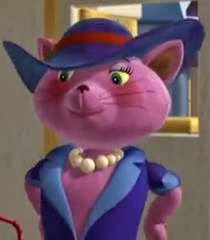 Afterwards was everyone’s favourite reformed delinquent, Noddy, who also has a pet dog. Noddy also has a friend called Miss Pink Cat. She’s not anybodies pet, she’s a character in her own right, with the best French accent this side of ‘Allo ‘Allo. If I were Bumpy Dog, the injustice of it all would make me hump her leg every single sodding time I saw here.

These are just two series that we happened to catch one after the other that perpetuate this gross slur against man’s best friend; there are plenty more. In fact the more I think about it, the more confusing it must be for kids because there is no rhyme nor reason why the dog is picked on other than it makes a good pet for the token humans to have (or in the case of City of Friends, a monkey to have).