When Ned isn’t demanding food, he’s often playing with toy food. We got him a toy kitchen for Christmas and he’s often serving up stuff we have to pretend to eat from it. 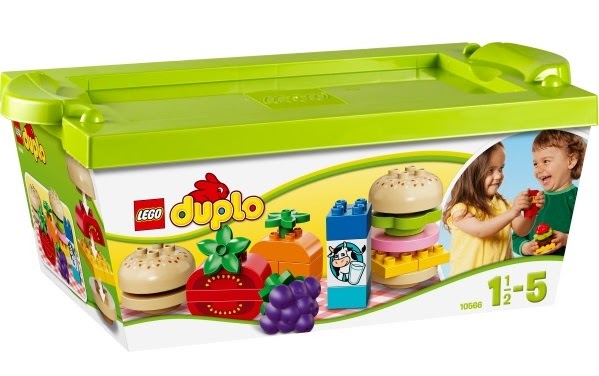 Duplo’s finest Creative Picnic set then, is a great addition to Ned’s arsenal. With the boy getting heavily into proper LEGO and Fifi battling through Friends and enjoying the Juniors range, Ned wants to get involved but he’s still at the age where he has a propensity to stick small little things in his mouth. That makes Duplo ideal for him and further makes this sort of thing even better. From a distance, watching him play with it, I could have been forgiven for thinking it was a burger set but it is entirely more wholesome. As an added bonus, it can be used to build large towers for demolition purposes too.

The set contains 52 pieces which can make up a tomato, some other vague fruit and obviously sandwiches/burgers. The lid doubles as a serving tray, and in Ned’s case a weapon of assault, but there are also some recipes inside for the slightly older Duplo users to make with their parents.

Ned loved it and at a RRP of £19.99, it’s pretty good value and it keeps him from pulling the hand and arms off the boys Storm Trooper LEGO figures. What more could you want?