When I was a lad the first generation of what affectionately became known as bedroom coders were really hitting the ground running. New home computers like the ZX Spectrum and the Commodore 64 were affordable and relatively easy to programme for. Games companies sprung up overnight and people like Matt Smith (Manic Miner), Jeff Minter (Attack of the Mutant Camels) and the Darling Brothers (they founded Codemasters, one of THE big UK game publishers) all became household names, and in some instances multi millionaires.

Well 30 odd years have passed and with the advent of the Raspberry Pi, programming is officially cool again and a whole new generation of kids are being invited to get back into writing their own code and doing a bit of electrical experimentation.

The Raspberry Pi itself is just a simple bare board computer- it doesn’t come with either a case, a keyboard or a mouse and you even have to source your own SD card and set it up with the operating system yourself. There are however several companies that have stepped in and built kits around the Pi to make things a bit easier. Fuze, are one of those companies and their eponymously named piece of kit is a million miles away from the bare circuit board of the basic Pi. 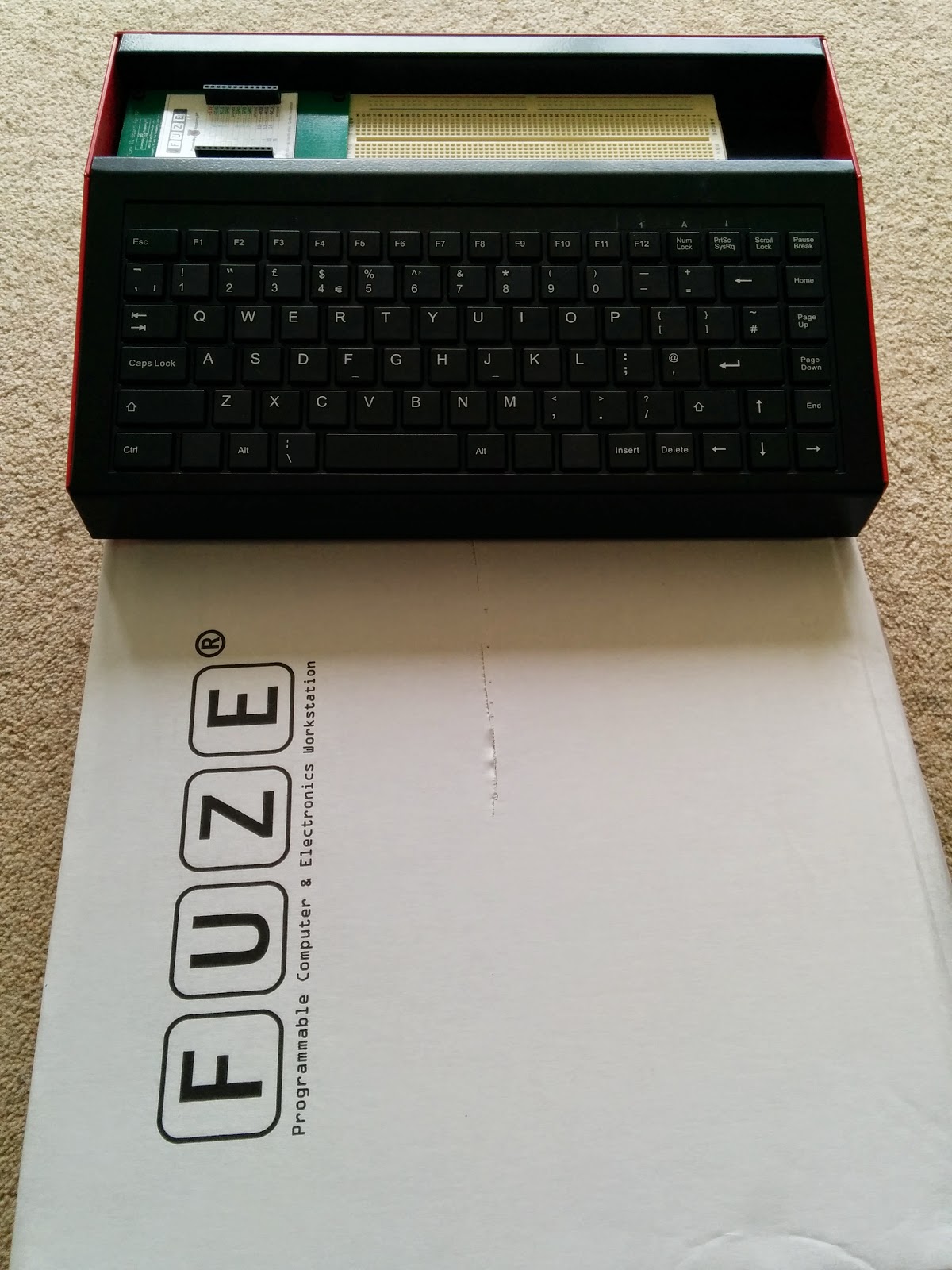 The Fuze has a decidedly retro look to it, a sort of half way house between a C64 and a Spectrum. The chassis is metal, and although the version I’ve reviewed has no spare USB slots (one is used internally for the keyboard, and the other for the mouse), a newer revision is on it’s way with more USB. Which is nice. It’s solid, and the keyboard is particularly nice for something of this side. If you’re not familiar with what looks like a mini cribbage board on the top, this is called a breadboard, and it’s for making circuits using the accompanying kit. This is the sort of thing you can connect externally to a normal Pi via it’s expansion port but here it’s built in to let (school) kids go right for the jugular in terms of development work from the start.

The enclosed 4gig SD card boots the Pi into one of the more long standing and stable versions of Linux- Debian- and is jam packed with stuff (although the decision has been make not to place an office suite on there- it’s for “proper” work rather than productivity)- there’s Scratch, Python, and Fuze Basic. The set I’ve been lent for review had two spiral bound copies of a starters guide to Fuze Basic. It all came flooding back fairly quickly, which was confidence building.

Given that the starters guide is more of a list of commands than a proper user guide, it’s fortunate that there are what Fuze call Fuze Project Cards available on the website. The first one, pithily entitled Hello World, is a really good indicator of just how good this device could be for schools. By the end of the first 8 page lesson, you’ve done the equivilent of me going into Boots in 1983 and typing:

Obviously without the huge hairy balls part mind you, but it’s a start. Whilst they’re good, the number of cards available on the official Fuze site is a bit lacking at the moment is a little limited. There are currently 5, and as far as I can see that’s only one more than there was at launch.

Are there any flies in the ointment? Well it’s price- £180- is a lot for what has a £30 mini computer at it’s heart but it ameliorates this with the sort of build quality that will probably survive the rigours of a secondary school well. It should last for all eternity in the home.

It could also do with a dedicated power button because at the moment, just like the Raspberry Pi itself, you can only turn it off by unplugging it. Yes, a flick at the wall will do it but not all of us have plugs in easy to reach places.

The only other concern is more of a support nature, I would have hoped by now there would be projects on the official site that would keep me out of mischief until the end of days. Having said that, once you’ve picked up the fairly easy basic, it’s possible to go to all sorts of places and you can still implement pretty much everything you can on a bog standard Pi. Personally I’m sad to see it go back. I can’t afford one at the moment but it has been an experience that I’ve had to find time for, and that in itself is a good recommendation.