When the boy demanded LEGO for his birthday, he did it with all of the singlemindedness he never brings to bear on his school work. He loves building LEGO sets, following the instructions and turning a pile of bricks into something entirely different. He’s good at it too- some of the sets he’s built recently are in the 9-14 age range and he’s only just turned 7. Yes, he needs some help but it’s invariably finding the missing piece of LEGO that’s lurking under the instruction manual rather than anything as obvious as interpreting the instructions. The boy knows where he is with instructions, and that’s just the way he likes it.

Through happenstance of timing, LEGO sent me a press release about some new Teenage Mutant Ninja Turtle LEGO the week before his birthday. We’d already bought him some other sets from the range and wrapped them in advance of the big day, so it was great when LEGO agreed to add to his haul with a review set for his birthday.

The Turtles are about to become very big again as Michael Bay is making a new live action film. April O’Neal is being played by that woman who pouted her way through the first two Transformer movies, and it will be huge. Not that it’s really gone away much to be honest- the TMNT film from a few years back was brilliant and there is also a new(ish) animated series available on DVD and some cable channels. It’s nominally this TV show the LEGO is based on. If you want the DVDs, they’re £3 each in Sainsburys at the moment. 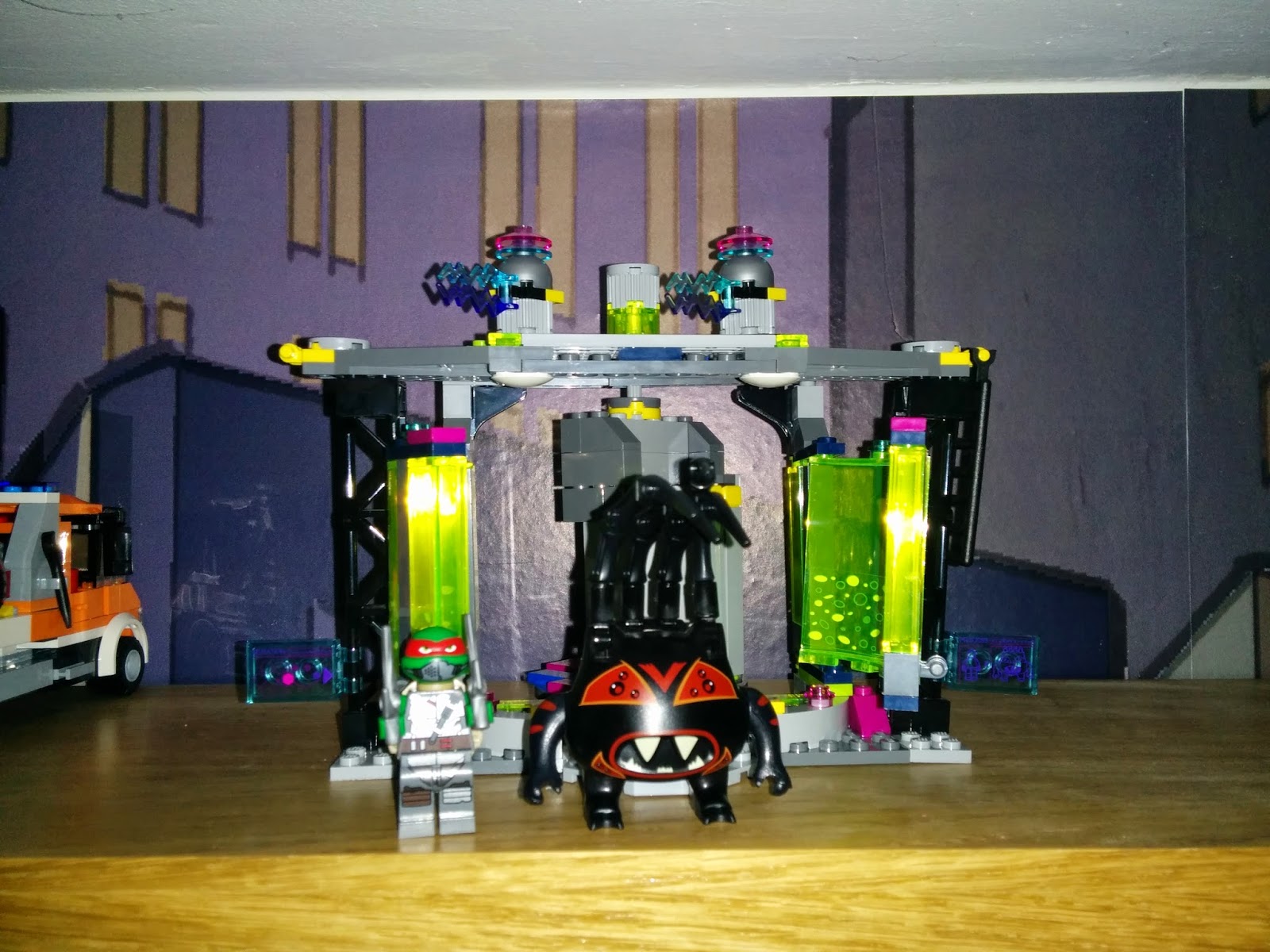 The Mutation Chamber set includes one of the Turtles and some scientist bloke who obviously never saw Jeff Goldblum in The Fly. The set involves a lab with a chamber you can pop a figure in holding a small spider, rotate it around and you can see the mutant spider thing pop out.

Whatever your attitude to licensed LEGO is (some love it, some think it distracts from the imagination process), you’d have to be dead inside not to find the Turtle LEGO figures absolutely cool. They’re right up there with Iron Man and the Storm Troopers as my favourite LEGO figures this side of the iconic 1979 Space Man that people of my generation love.

The set retails at £19.99 and didn’t cause the boy any problems during the build. Funnily enough he likes it as much as the Turtle lair attack set (79103), which is a lot more expensive (RRP £50 but available online for £35 if you shop around). I think the idea of a mutation chamber really appealed to him and he kept on putting different figures in there to mutate into the giant spider thing. I imagine if I browse the TV show, I’ll find a direct episode that this relates to.

This is a good fun and affordable set of LEGO for the Teenage Mutant Ninja Turtle fan in your life.