” If you only see one group with a bearded bald man in a silver jacket doing pelvic thrusts whilst playing the synth this year, make sure it’s Le Galaxie.”

Ah Nozstock, Nozstock, so good they named it but once and I repeated that name for effect. If you’re able to cast your mind back to last year, you’ll remember we went to a rather fab boutique music in Bromyard, Herefordshire, last year. The boy particularly liked it and even wrote his own review, and so we went back this year for more of the same, only different.

Different because the kids were all a year older, the acts were different and we knew what to expect. The same because everything was in exactly the same place, and even the wicker Dalek had only moved a few metres from where it was last year. There is something comforting in knowing that everything has it’s place.

There are many things we love about Nozstock but if I had to put the important ones for a family in a list they would be: 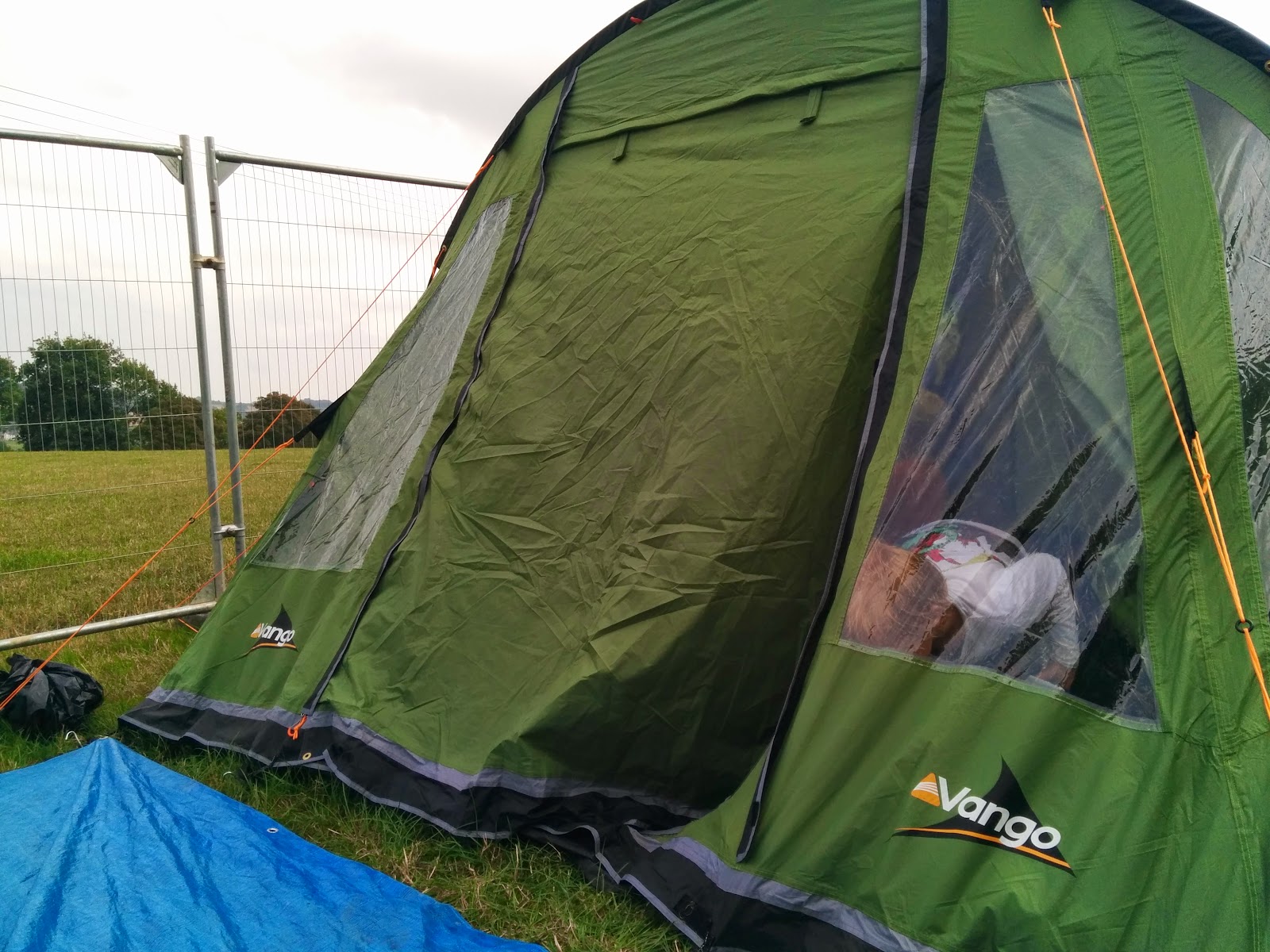 We pitched up and pitched our tent on Friday lunch time in the bright sunshine. The sun stayed with us until mid afternoon, whereupon it began raining sporadically for the rest of the evening. Did this stop us? Not in the slightest, although it made cooking dinner on the camp stove slightly tricky.

But enough of the facilities! A festival is about festive stuff- music, entertainment and fun! Hurrah! And indeed we did have fun, by the bucket load. Our friend Lisa kindly lent us her Radio Flyer truck, so we carted the kids about in that when they couldn’t be bothered to to walk and it also gave us a good way to demarcate our territory when it came to watching some tunes. I’ll put my hands up now and say that my overriding plan for the weekend was to ensure I was at the right stage at the right time to catch the originator of Chap Hop, the immaculately presented Mr B. The Gentleman Rhymer and everything else was secondary but that plan didn’t account for the great music we’d stumble across.

The first truly magnificent band we discovered this Nozstock was Le Galaxie, an Irish disco group that sound as good in the studio as they do live (I’ve found some bands I’ve thought awesome at festivals in the past sound a little weedy on record which has been a disappointment). I won’t beat about the bush, Le Galaxie were as good as anything I’ve heard since Scissor Sisters and had better beards to boot. They also gave absolutely everything in their performance, something we all appreciated, despite the slightly grim weather. If you only see one group with a bearded bald man in a silver jacket doing pelvic thrusts whilst playing the synth this year, make sure it’s Le Galaxie.

Molotov Jukebox and Dizraeli and the Small Gods also made it onto our SONOS as soon as we got home and the boy even made wifey buy a Mr B. The Gentleman Rhymer CD as we couldn’t find it on Spotify (it turns out you need the fullstop after the B, otherwise Spotify plays dumb). In fact the boy even wrote his own Mr B. tribute piece, which you can read here. He also did some tribute artwork which got the thumbs up for Mr B. himself:

@zooarchaeologis @Nozstock Well, that is rather marvelous. Well played him! There’s the next album artwork and cover sorted out then.
— Mr.B (@gentlemanrhymer) August 4, 2014

We did of course have our now obligatory session of Ned falling asleep during some great music, as you can see from this picture: 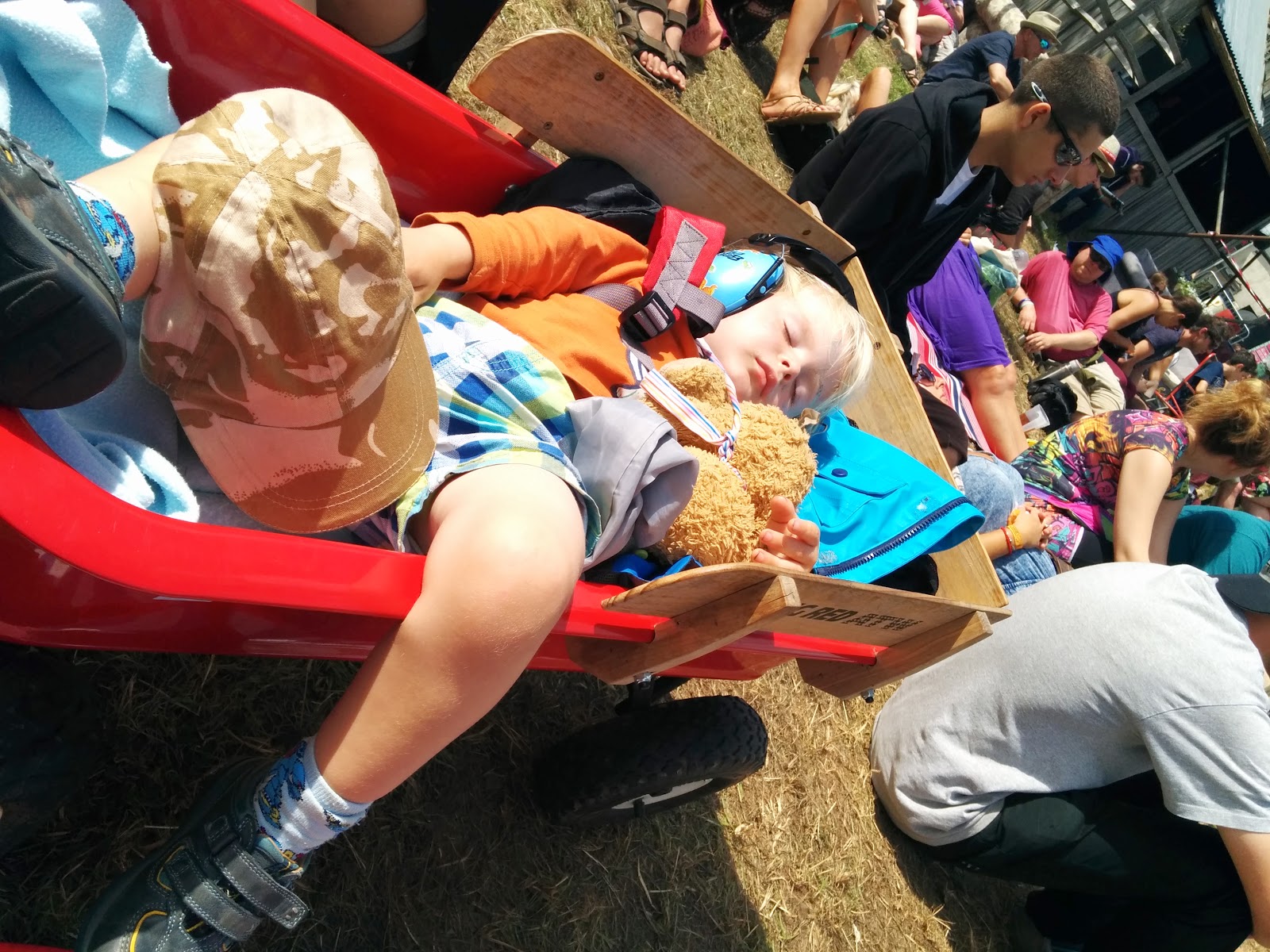 But that was as much to do with the excitement as anything else. The weather on Sunday was glorious and the ground had pretty much dried out by mid morning, making the rain the day before a dim and distant memory.

I’ve put a few of our favourite acts into a Spotify playlist below (there is an official Nozstock playlist but this one is mine dammit). I will at this stage conveniently fail to mention that I almost took the boy into a a theatre production at about 11pm that was apparently called Art Wank and included the re-enactement of vintage Victorian porn. Whoops, and a big thank you to the two girls who warned we off it! Fifi went to a brilliant puppet workshop in the same venue the next day, which shows that there is something for absolutely everyone at Nozstock.

We shall be back next year!