On Sunday I took Fifi, with the two boys in tow, into London to have a play with the American construction toy that’s been creating quite a buzz- Goldieblox. Last year Goldieblox was subject to a very successful Kickstarter campaign as it’s founder extolled the virtues of a construction toy that was designed for girls from the ground up.

As Debra Sterlings’ Kickstarter videos showed, there is more to making a construction toy that engages girls than simply re-releasing the existing toy in PINK.

So (in case you’ve not watched the video), in this instance from the ground up means that Goldieblox is designed to engage girls. Debra’s research showed her that girls respond much better to a narrative structure in their play, something that doesn’t tend to be intrinsically built into construction toys. Consequently, each Goldieblox set has a story-book with it that your kid can work through in tandem with the kit.

The kit itself is defiantly not pink, as though it’s making a point of being not pink. The colours are pastel, mostly purples and golds and blues though. Currently there are three different sets to buy, only one of which has a base to anchor less mobile constructions on.

The Spinning machine is the set with the base unit by the way. 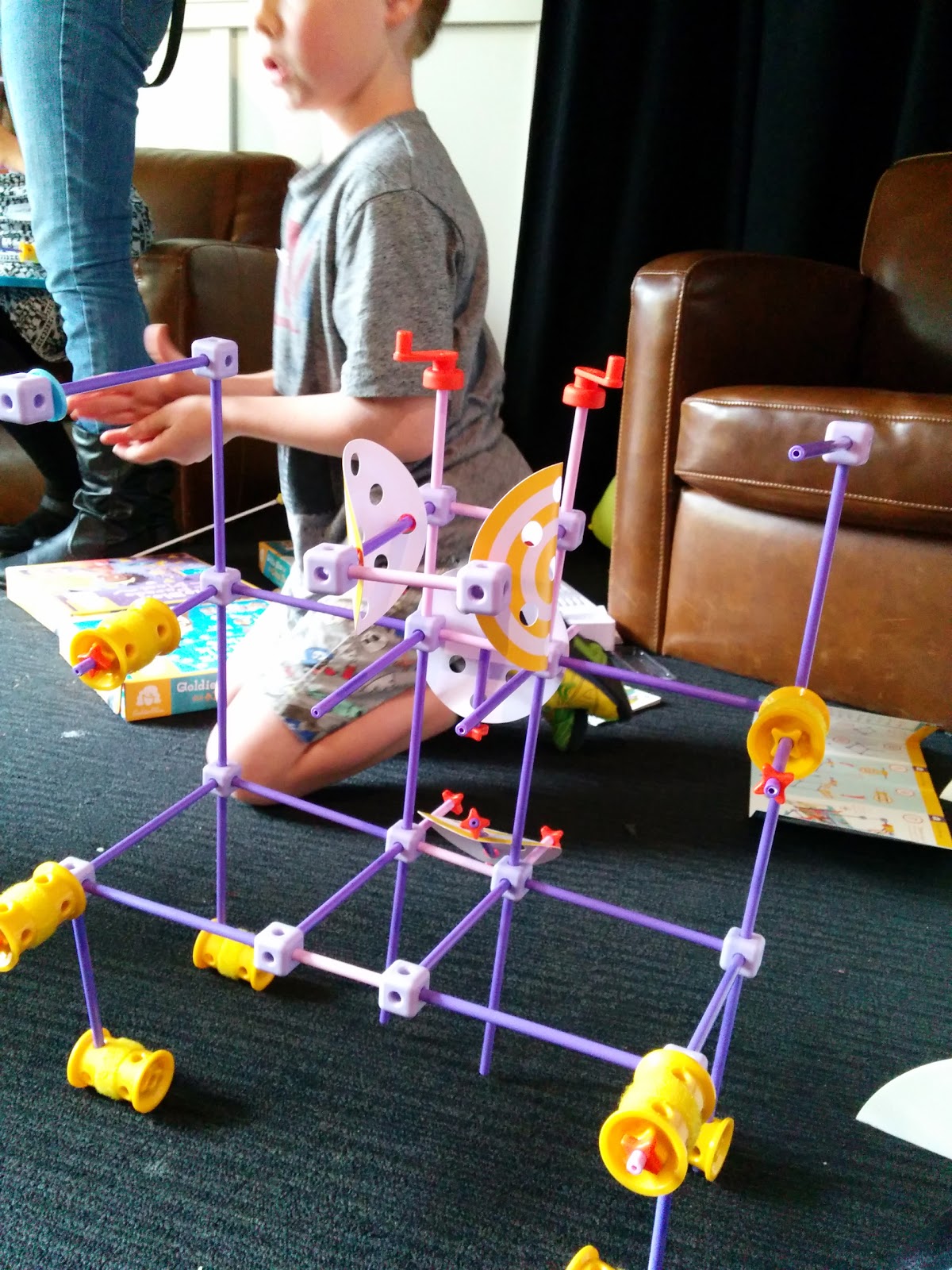 In terms of the mechanics of it, in a sense Goldieblox doesn’t do anything new. There are cubic connectors with a hole on each face to slot the connecting rods in. This means there is effectively only the option of connecting stuff at right angles; going forwards it would be nice to see some 45 degree joints added for a bit of variety. The addition of rollers is however a stroke of genius as these can work as winders (with the option to attach a little handle) or as wheels, as the case dictates. This adds a nice bit of variety to the kits and allows the kids to design a lot more things off their own bat.
Fifi made a really simple car and spent quite a lot of time whizzing it all over the floor, much to the consternation of Ned, who seemed to be in the way rather too often.
We worked through the story book on one of the sets- The Dunk Tank- and made ourselves a fully functional dunk tank, which was nice but after we did that we decided to modify the set into a catapult (or more technically, a trebuchet) and set about firing the animal figures at Mrs C.
Overall I think that Goldieblox works well as a girls toy that, thanks to the colours, boys won’t be too reticent to play with. The story book can be completely disregarded, which suited the boy down to the ground. If I had a criticism, it would be that there could perhaps be a few more bits of actual construction kit in each set- the construction seen in the photo above cannibalised bits from at least two sets- to enable better free play since there is probably a finite amount of replay value in the story book. Obviously this is a matter of economics- Goldieblox was Kickstarted, and volume discount from their manufacturer is probably still something sitting on the horizon. Nevertheless as a way of enthusing girls into building, it’s something I would recommend.