The first few days of the Commonwealth Games were glorious- full of sunshine and bright clear skies. Sorry I had to ruin it by hopping on a train at Euston for the five hour trip to Glasgow- it was obviously my fault because it was pee’ing it down by the time I got there.

Still, even though the summer rain fell unabated at times, the couple of days James and I spent there as guests of Virgin Media were great. Although I’ve been to Scotland before, I’ll admit it’s been the more remote areas like the Isle of Mull or the shores of Loch Awe, so finding myself in a large city with thousands of other people gathered for a big sporting event was brilliant. There was a real buzz going on that simply wasn’t present in a lot of London during the Olympics. That makes sense of course since Glasgow is a lot smaller and has less general tourists than London but it made for a much better atmosphere in my mind.

Virgin Media were one of the main sponsors of the Games, and while it was a shame their main men, Mo (Farrah) and Usain Bolt, didn’t feature quite as much as we’d have all liked (or at all in Mo’s unfortunate case), the Games were definitely enlivened by Usain’s arrival, his press conference, and even, dare I say it, the races he took part in. The man is a bona fide superstar of the track, and I even got to try and beat him over a 30m sprint. Sort of.

The seats we had were great; we had a view of the home straight, so all the sprints were run directly in front of us and the medals handed out just down from where we were sitting. Which was nice.

After spending a good afternoon at Hampden Park watching track and field (some hammer, triple jump, shot and most of the heats of the 100m AND the 5,000m final), we headed over to the park for a go at Race Bolt. If you haven’t heard, Race Bolt was a nifty thing that Virgin Media set up at the Games to let us proles see how relatively slow Mr B is over the first 30m and how utterly unattainable even his slow start is for mortal humans. Usain Bolt is a big chap, 6ft 5, so consequently he doesn’t get away from the blocks as quickly as some of the smaller sprinters. Given the fact that at around 80m, Bolt has usually slowed up and is looking around, raising his arms to celebrate and maybe thinking about a nice cup of tea, that means he basically has the intervening 50m to catch up with everybody, overtake them, and get so far out in front it makes everyone else look more than a little bit silly.

I’d already had some practice in the running stakes, in rather unfortunate circumstances. My train into London on Sunday morning was supposed to be the 7:07am, getting into St Pancras, London at 7:45am. My train to Glasgow left Euston, which is a ten minute walk from St Pancras, at 7:45am. As I was walking the two miles to the train station from our house, I thought, “Pfft, I’ll get the next train, I don’t want to sit around for an hour.”

After twenty minutes of dawdling, I thought to check the time of the next train. On a working day they’re never more than 15 minutes apart and the fast trains make it into London in 17 minutes. However when I checked, I realised if I didn’t get the train that was over a mile away in precisely 9 minutes, I’d have a long wait and only 4 minutes to do my transit between the two stations.

Hand on my heart, I don’t think I’ve ever run that quickly or that far carrying a suitcase before and it’s likely I never will again. I just about made it but as the Vine above shows, the sweat was running off me. Although it was only 7am, it was hot and muggy and between you and me I might have had to take my PJ top out of my suitcase and use it to mop the sweat off of me on the trip into London.

So yes, I was well practised for the sprint race against a virtual Bolt on a blooming big outdoor screen. We did some nice stretches and had a few goes on setting the blocks up for a proper start, then it was my go! 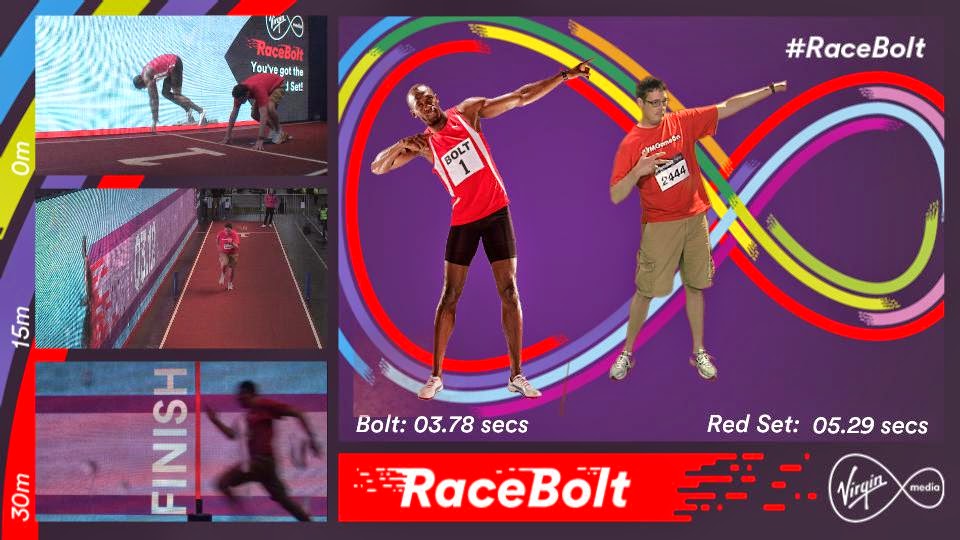 I was 1.51 seconds slower over 30m than Usain Bolt but there were mitigating circumstances. I didn’t have time to change into my lyrca running shorts, which would have shaved a few tenths of my time and a few years off anyone who saw me in them, and the announcer bloke decided that my go was the time where he had got bored of doing a three-two-one count down, so the starting gun surprised me a little, losing me another few precious tenths. All in all, I’d have probably comfortably beaten Bolt’s time I reckon. Honest.
I was great fun though, at a testimony to how great Virgin Media are at jazzy things like this. The opening ceremony had only been on the Wednesday but by late Sunday, I was running with a number of almost two and a half thousand, so loads of people had managed to have a go. Some of the kids were depressingly quick too, so quick I don’t really want to talk about it or go into it in any real detail as it will make me hunt down a cake shop.
Bolt makes a good figurehead for Virgin Media as he’s blooming quick, as their broadband is. We’ve been with Virgin as cable customers for over 7 years now, ever since we got a fault on our BT phone line and BT wanted three times as much as installing Virgin Cable would have cost just to look at the problem (£50 install against £150 for the BT engineer call out if he couldn’t find a fault outside the house- it didn’t mean there was a fault inside the house, which was our responsibility, just that he hadn’t found one outside, which isn’t the same thing at all and to me seemed a bit of a risk). We’re currently on a 120Mbps connection, which is fast enough to do pretty much everything we could ever wish, including watching streaming high definition telly of the rest of the Commonwealth Games after I got back.