As long time readers of the blog may know, I used to be a bit of a Doctor Who fan, so I counted myself lucky last year when I stumbled across Neil’s blog which diarised his rather epic re-watching of all the available Doctor Who episodes with his wife and stepdaughter, two hapless individuals who had missed out on so much when they were growing up by not watching Doctor Who. I have to admit I didn’t read it religiously, I rather dipped in and out when they were dealing with a story that I was particularly familiar with or held fondly in my memories. And I’m also terrible at regularly committing to anything. I’m the person who liked the pilot to Lost, the first 3 episodes of the Sopranos, the first series of Breaking Bad and never watched the rest of any of them.

That blog is now a book with added extra sauce, and is available on Amazon here. This is a long review, with more tangents than a Douglas Adams novel, so I’ll be upfront, if you ever used to watch Doctor Who before Ecclestone starred in the “reboot”, then you have to buy this book. It is as essential as those big Peter Haining Doctor Who factual books I had when I was little.

What Neil manages to do is capture what it was to be a boy in the 70’s/80’s to near perfection, and furthermore what it’s like to carry on your childhood obsessions into adulthood. What makes it more accessible is the introduction of his wife Sue, a complete Doctor Who neophyte, who brings a fresh take on it all and automatically opens up a human interest element to the tale, and as a by-product also makes it interesting for those poor souls who aren’t Doctor Who fans.

Neil intersperses his reminisces of growing up with Doctor Who with snippets of dialogue between himself and Sue taken (in shorthand) from when they were re-watching the episodes over a rather epic two and a half year period for the blog. Neil is a few years older than me but like him, my earliest memory is of a Doctor Who episode. For Neil it was episode 2 of Carnival of Monsters on Saturday 3 February 1973, for me it was the end of the first episode of Tom Baker’s City of Death. Like Neil, I can pin it down to a specific time and date because the BBC simply didn’t repeat stuff back then and our first video recorder, a top loading Sony Betamax machine, was still a few years distant. It was the 29 September, 1979, and I was four and three quarters years old. I remember vividly cowering behind a brown cushion (brown, because it was definitely the 70’s) as Count Scarlioni pulled off his rubber face mask to reveal a Cyclopean spinach monster underneath. I was terrified and it was brilliant. 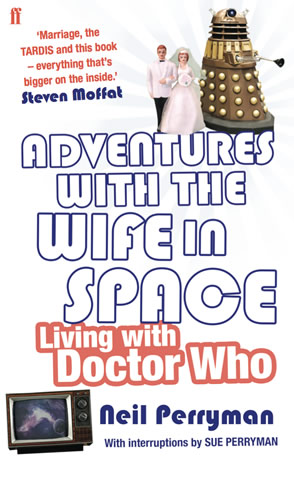 Even by the point I’d reached about a third of the way through the book, I’d had to put it down numerous times- once to check who made my Doctor Who toys I had from my youth (it was Dapol), and another time to see if I had the Target novel of The Wheel in Space that Neil mentioned he was missing (I’ve recently unpacked all my kids books after my parents had a clear out and foisted a huge but suspiciously not quite huge enough box of them on me). I didn’t have it but I do remember our local library had such a huge collection of them, I used to check every couple of days to see if there were any I hadn’t read. As time went by my success rate declined rapidly in that regard.

Like Neil says, being a Doctor Who fan in the days before the world wide web was a whole different kettle of fish to what it is now. So much information is now on tap, anyone can be a proper Doctor Who nerd if they’re inclined to put the time in, all they have to do is put the time aside to memorise things. Back then, you had to do proper research, and not just in the pages of Doctor Who Monthly either. Second hand bookshops, features in magazines or the Radio Times had to be found- this stuff wasn’t a search string away. When I spotted Travels without the Tardis in 1987, in a branch of WH Smiths, I had to have it even though I was 12 and had no means of visiting any of the locations used in filming (mostly quarries) that the book detailed. I might never have seen the book again, and that was a risk that wasn’t worth taking!

Weighing in at a little over 300 pages in paperback (including the appendices), Adventures with the Wife in Space: Living With Doctor Who was over all too quickly for my liking. It’s a great book and Neil has a very self deprecating way of telling amusing anecdotes. It’s also great to read something by such a passionate fan that doesn’t descend into what I think of as the “African or European?”* territory of pedantry. For example, occasionally I have been known to accidentally insert a rouge secondary “D” in Peter Davison’s name when I’m typing something about Doctor Who- to a large percentage of fans this would mean whatever point I was making was immediately rendered invalid because if I couldn’t spell the fifth Doctor’s name right, what hope did I have of knowing anything?Which is bonkers. All it really means is I spelt someone’s name incorrectly but fandom isn’t like that. That Neil manages to come across as very knowledgeable on the subject without being a know it all, is testimony to the fact he’s managed that rare trick of being a grown up sci fi as opposed to one of these man-child types you see frequenting forums and website comment boxes.

So Adventures with the Wife in Space is definitely worth a read, I got through it in a couple of days during a well earned break from the Malazan Book of the Fallen, which I’m trying to finish before Peter F Hamilton’s next doorstop comes out. If you only spend £1.69 (on Kindle, for a limited time only) on one book about a long running TV show this year, make sure it’s the Adventures with the Wife in Space.

*after the great scene in Monty Python and the Holy Grail where the two soldiers are discussing whether the coconut could have been carried under the dorsal feathers of the swallow. The conversation gets more and more mired in detail as each one tries to show his knowledge of birds off to the point where the original point is, well, lost.