As party conference season is upon us, we can see the efforts the press are going to in order to keep anything like policy off the front pages- Miliband has been ridiculed for not talking about the deficit in a long speech he attempted to memorise, and the Tories appear to be tearing themselves apart publicly over both sleaze and Europe.

I do love the way the Tories get so obsessed and indeed start frothing at the mouth at the mere mention of “in out referendum on Europe”, as if this is something the man on the Clapham Omnibus (now sadly a cashless affair after recent “improvements” to the payment system), sits and chats about with his fellow travellers. Still, it has to be better than the Minister for (un)Civil Society, Brooks Newmark, emailing naked photos of himself to all and sundry. And while I’m at it, is there some special naming association for Conservative MPs? Mark Reckless, the defecting Tory, has a brilliant name, and it’s up there with the likes of Michael Fabricant in my book. 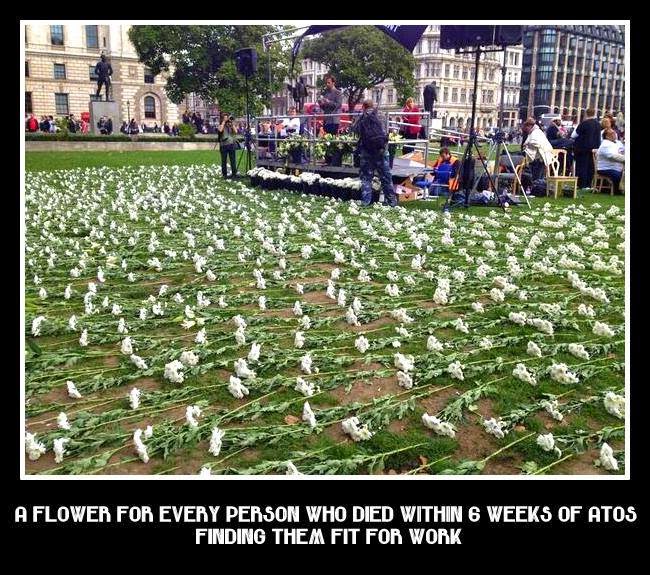 But underneath it all there is an important question that has to be asked, and if you’ve not guessed it, you obviously didn’t read the title properly. Just why do the government’s policies seem so inherently unfair? Whether it’s the well documented cases of terminally ill people being assessed as fit to work by Atos and having their benefits stopped, or the massive rise in working people having to resort to food banks to feed their family, it’s hard to reconcile the apparent “recovery” and booming economy with what people seem to be experiencing day to day in what for want of a better phrase I’ll call real life.

The glib answer is that the Conservatives policies are aimed at the same bunch of Eton types that got us into this (Eton) mess in the first place- jobs for the boys, MPs currying favour with the sort of big business that will give out Non Exec Directorships like sweeties to those who do them a favour. Of course this falls short when you consider that those business types are pretty finite in numbers and certainly couldn’t be responsible for voting the current omnishambles of a coalition in.

A big clue to who government policy is aimed at enticing to vote can be seen in the Prince of Darkness’s announcement that the Pension Death Tax is being abolished.

Looking at some statistics from the last election, 49% of those who voted Conservative were over 65, compared to 28% for Labour (source: Daily Mail), a stat that really shows who the Conservative party is run for. Interestingly, the ageing is even worse for UKIP, who’s voters have predominately come from the Tory’s anyway. This means without UKIP, the likelihood is that more than half of Tory voters would be over 65.

Suddenly it makes sense. Old people have an inherent suspicion of so many things:

When you stop to consider this, a lot of the governments policies make much more sense. No wonder the Tories are looking for a rise in interest rates- a large proportion of their voter base has paid off their mortgage and are looking at risible returns on their savings, and moaning about how unfair it is, even if they contributed to the housing shortage under right to buy in the 80’s.
Of course not every old person is a blue rinse Tory who hates the young and there are plenty of old fashioned working men (and women) out there who have voted Labour all their life. A lot of these feel betrayed by New Labour of course but they still vote for the hope of a more just society. More elderly people don’t though, they vote to support their prejudices and more importantly, they vote to make their lives better which by definition is going to be much more short term because they’re old already. Who cares if there is woeful underinvestment in something will fall to pieces within decades if you’re expecting to shuffle off this mortal coil in the next twenty years? You can tut about how the young are ruining it all by working three zero hour contracts that together pay below a living wage and have to supplement their wages with trips to charity food banks.
What of the affluent South though? I hear you cry. There are plenty of well off middle class people who vote blue. There probably are swathes of people who genuinely believe in the concept of meritocracy that the Tories preach but this wears thin when you have Cabinet ministers like Michael Gove (scholarship to an independent college, then Oxford university), complaining about an impenetrable Old Etonian clique at the heart of government to my mind. If someone with his education, who also headed the Oxford Union, is complaining that it’s jobs for the boys, what chance does everyone else have?
It is telling that other criteria, like average income, level of education and gender are fairly similar between Labour and the Conservatives, and even social class only sees a 10% point difference (63% versus 53%) between ABC1’s, that age is such a clear area where there is a massive disparity. Of course with an ageing population, specifically an ageing population of voters, this is going to potentially get worse.
How then do we tackle this issue? There are several ways to do this, including making voting compulsory, lowering the age of voting to 16 but for off the wall sheer genius, it’s over to my chum Harry and his idea from 2011:

Research shows that the older generation vote quite selfishly in general elections. They even feel guilty about doing so, but do it anyway. So what we have right now is a government voted for and supported by the grandparents of children whose long-term education and employment needs have been banjoed by that very same government. The older generation has got what it wants and has pulled the ladder up, sorry kids, your screwed.
…..
My solution would be to simply give votes to children. But until the age of 18 (or 16 – we could lower the voting age too) the votes are cast by their parents. Obviously there are practical issues of who gets to cast their votes on their behalf – mother or father – but these are just small issues to be ironed out.

Osborne has just announced a two year freeze on the increase in working benefits- which effectively means that yet again pensioners are exempted from a government cut. As if more proof were needed…