If you’ve heard of Nest, the chances are it might have been when Google paid over $3bn to acquire the maker of smart thermostats a little while ago. But Nest don’t just do thermostats, they now do smoke & CO2 detectors too.

Nest are one of the companies at the forefront of what’s know as The Internet of Things (nobody abbreviates it to TiTs which is a shame). Basically this means that everyday stuff is getting smart and connected to the internet and linked in to apps and computers. An extreme form of this are the fridges that will now email/SMS you when you’re running low on milk. Of course I notice I’m running low on milk when I’ve made a tea and there’s little milk left in the carton but even so… 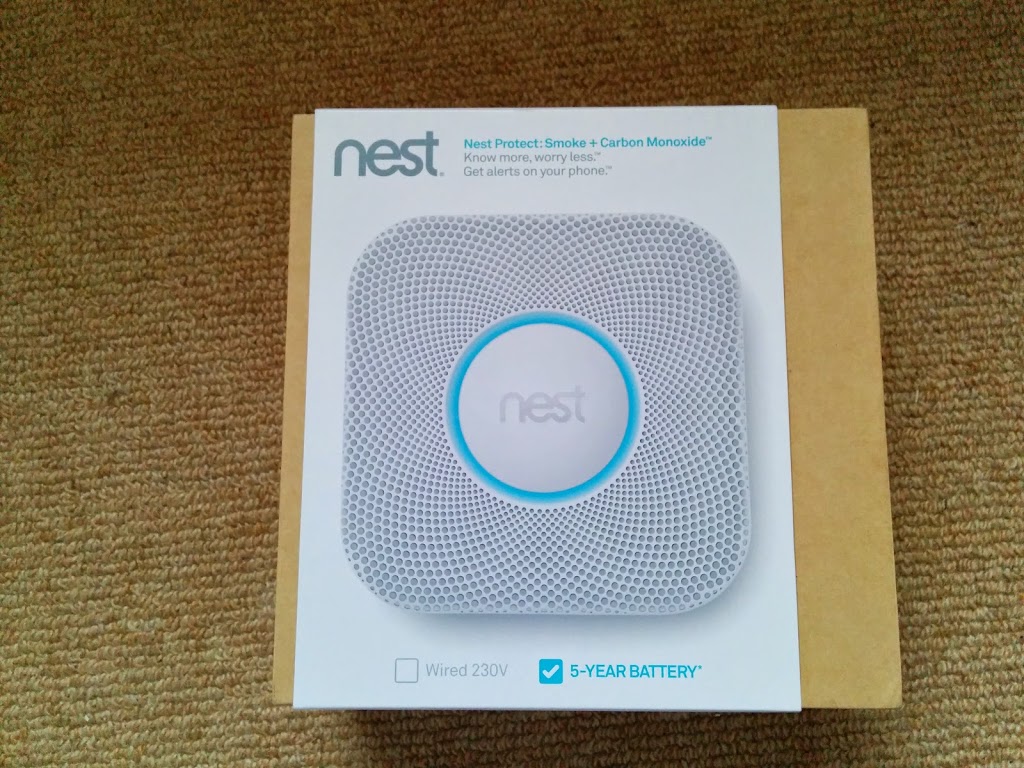 The Nest smoke and CO2 alarm is, as it suggests, a combined smoke and CO2 alarm It comes in two versions, one is mains powered, the other battery powered. I was sceptical about the one I was sent initially as it’s battery powered. Considering how frequently I have to change the 9V batteries in our conventional smoke alarms, I was curious to see what the expected life of the batteries in a smoke alarm that has WiFi would be quoted at. Apparently the 6 long life AA batteries give an estimated 5 years life, something that is achieved by a slightly different operational process than the mains powered version. The mains operated version, given it’s unlimited power, does a bit more in terms of talking to your Nest thermostat (if you have one) and issuing updates. 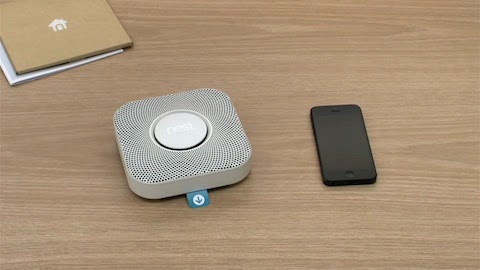 The battery operated Nest smoke and CO2 alarm is as easy to physically install as a conventional smoke detector- it has a back plate that screws to the ceiling (plasterboard screws included), which the actual detector then clips into. The detector itself is a little heavier than conventional kit, due to the additional battery mass and the clever electronic gubbins but at no point have I been concerned that it’s about to fall off the ceiling and crush me to death. But before you click it into the ceiling, you have to install the app on a device (smartphone/tablet/etc) and go through the set up procedure. I was impressed with the WiFi range that Nest has, it’s increasingly looking like my Nexus 5 is the weak link when it comes to WiFi range, and that’s a nuisance. I had to register an account as part of the set up process, since this is the first Nest device we’ve had but all in all it only took a few minutes. The instructions are, if not idiot proof, than certainly parent proof and I would have thought my dad, who is in his 70’s, could have installed it with ease. 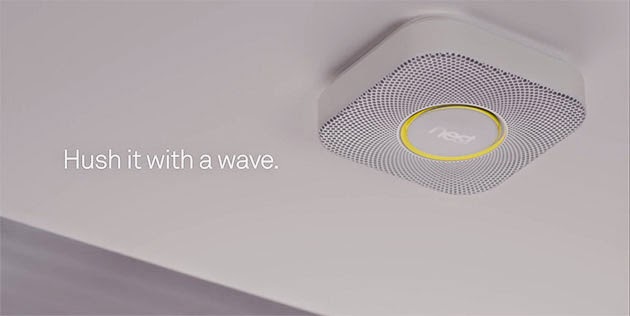 Once the detector is set up and installed, it sits there innocuously until something triggers it. The device gives a verbal warning as well as sending an alert to your phone. We were able to (accidentally) trigger the alarm by a way of a particularly hot steamy shower since the alarm is situated on our landing which also has the boiler in a cupboard. I got several alerts, telling me that smoke was building, it was time to get out and that smoke levels were reducing. Thankfully we’ve not had a CO2 alarm but if you have a Nest smart thermostat the smoke and CO2 alarm will communicate wirelessly with it to turn the boiler off, which is where the Internet of Things really gets clever in my book.

There are several clever features like the alarm/thermostat link that we were obviously unable to test but if they work as advertised are really useful. When you install a Nest smoke and CO2 alarm, you tell the app where you have installed it. If you install more than one in your house, if one goes off the verbal warning is spoken from all of them. This means if I accidentally started a fire in the bedroom (I left my hair straighteners on the bed or something), the alarm in the sitting room would go off and tell everyone downstairs that the bedroom was full of smoke. That is clever. There is also a “pathfinder” function that you can turn off or on via the app, that makes the alarm glow slightly when motion is sensed underneath- a sort of very faint night light function.

I’m willing to call the false alarm with steam from the shower a one off as it’s not reoccurred and overall I think the Nest smoke and CO2 alarm is a great concept. Obviously the more you buy into the Nest infrastructure, the more sense it makes. If you already have a Nest smart thermostat or are thinking of upgrading to a smart thermostat the decision to get at least one of these to locate near the boiler or gas fire is pretty much a no brainer. You are legally required to have smoke and CO2 alarms in certain places anyway, and Nest summarise this well. At £89 each, this means since the legal requirement is to have one per floor (there is also a requirement to have a CO2 detector in any room with a gas appliance but the two requirements can overlap), we would need a minimum of two which would come to £178, if we were to go entirely the Nest route. In reality however we actually have smoke detectors in all the bedrooms, the sitting room, the playroom, and the study, as well as the hallway and landing. That’s 9 in total and that would cost us over £800 to entirely “Nest” up our house.

So whilst the Nest smoke and CO2 alarm is definitely the cleverest smart system I’ve seen, for us, with four bedrooms and a garage conversion, it’s a little impractical to fully adopt. Having said that however, it makes a lot of sense to use one per floor in conjunction with conventional alarms and that’s what I think I’ll aim for going forwards.