Yesterday we popped down to Stonehenge on our way back from a short break in Dorset. I say “popped down”, now days it has to be more organised than that because there are only limited tickets available to people who just turn up, you have to book online to be quite sure that you’ll get to see the new visitors centre and the old stones. I actually sat in the car park of the Lyme Bay Winery and made the booking via my smartphone. It was 11am and they only had 17 tickets available for the 2:30pm timed access slot.

This is the first time we’ve been to the ‘Henge with the kids; the last time we went there was BC (before children), with a Young Archaeologists Club group for a special access session. In these special access sessions, you get access between the stones out of hours if you make the necessary arrangements. It was a special day back then, and it’s depressing how young I look in the photos really. 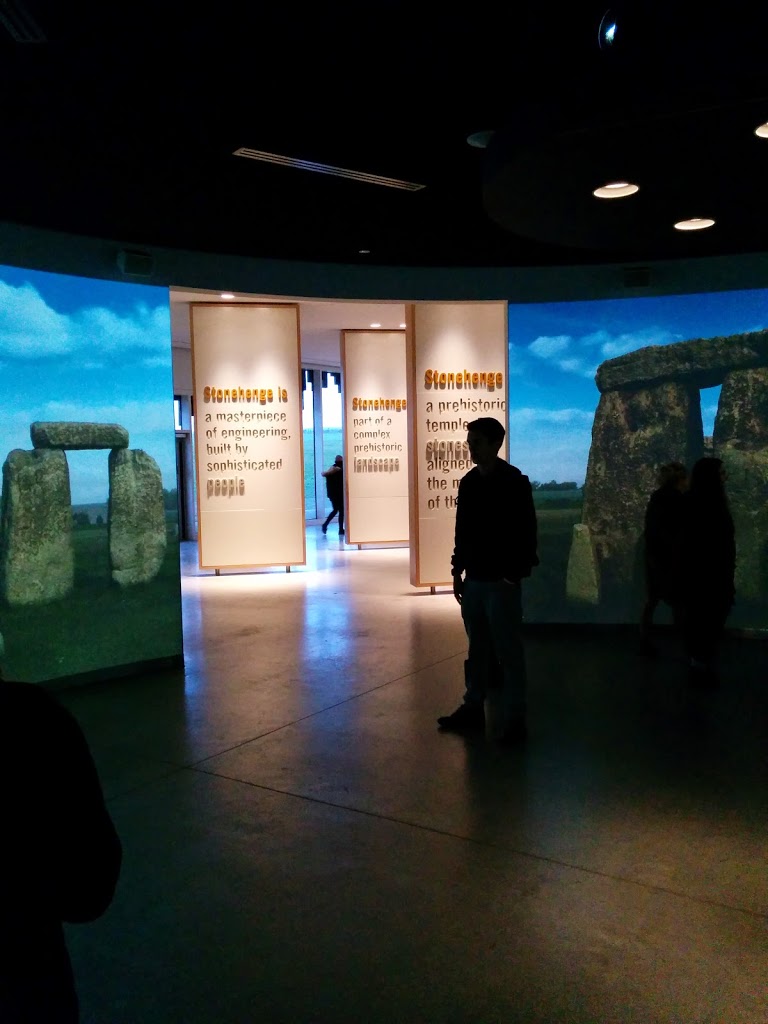 Fast forward to now though, and it was an overcast day when we trundled up the new access road to the brand spanking new visitors centre, located a 2 minute bus/8 minute land train ride away from the main attraction. The visitor centre itself is huge and looks like it was designed to reflect the fact it’s situated at a World Heritage Centre site. Having said that, there were a few things that could have been improved on. Firstly the exhibition covered a lot of floor space but for some unfathomable reason the objects were crammed into display cases that took up perhaps a quarter of the floor space. The rest was given over to an impressive projected display of Stonehenge and some rather pointless boards with trendy text motifs on them. A missed opportunity, doubly so when you realise that all the cabinets were high enough that I had to lift my 5 year old up to see the objects, whilst being jostled by a coach load of German tourists.

Heading outside though, the neolithic huts that have been built are a lot better. I earned the eternal awe of my kids by producing a pocket torch to light the dingy interior of the first hut we went in but it was the third hut, the one that contained the authentically costumed neolithic lady with all the accoutrements of her time that was the best. Fifi loved blowing her horn. We also impressed ourselves on the “haul a Sarsen stone over a rolling platform” thingy they had, displaying the combined pulling power of around 20 neolithic people. 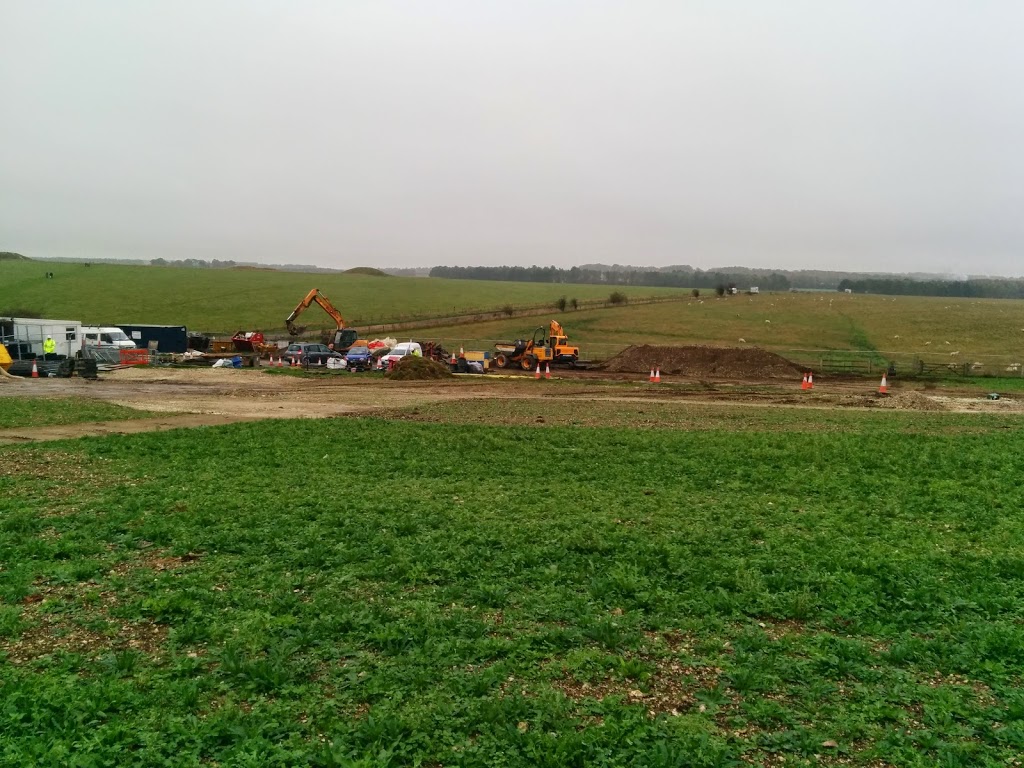 After the 8 minute land train ride (three motorised carriages pulled by a Landrover), we firstly got a great view of the old visitors centre being demolished, then, turning to our right, the actual main attraction itself: Stonehenge.

The Henge itself is roped off, as it has been for years and years. You get closer on one side of the walk way than the other and that’s obviously the area where people congregate. In this instance the congregation was interrupted by a film crew who appeared to be filming an advertisement for some jewellery made, gasp, out of the same stone that Stonehenge is. We had free entry as we’re English Heritage members but I must admit I would have been pretty pee’d off if we’d paid and come out of our way to visit only to have the best view hogged by a camera crew banging on about stone jewellery. 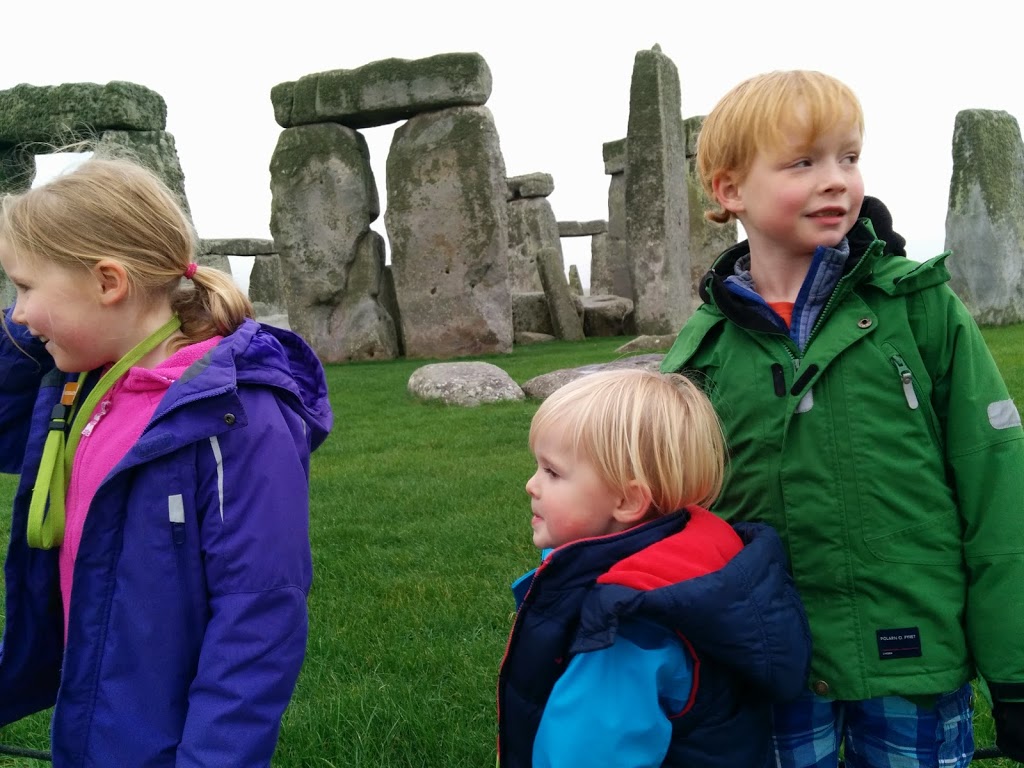 The kids made use of the excellent free audio guides, and the boy, 7, was keen to educate us on everything he heard. It was also great to have a chat with one of the English Heritage stewards, Simon, about when the concrete infill occurred on one of the damaged blocks. 1958 apparently, which was embarrassing as I hadn’t noticed it ten years ago when I was up close.