As Christmas rapidly approaches, at work we’ve all been looking at various Spotify Christmas play lists to plague the office with on the last day or two before Christmas so when GiffGaff offered a review unit of the Inateck IPX5 Waterproof Bluetooth Speaker for me to have a play with, I thought I’d say yes as it was bound to be better than the tinny laptop speakers we’re all plagued by. 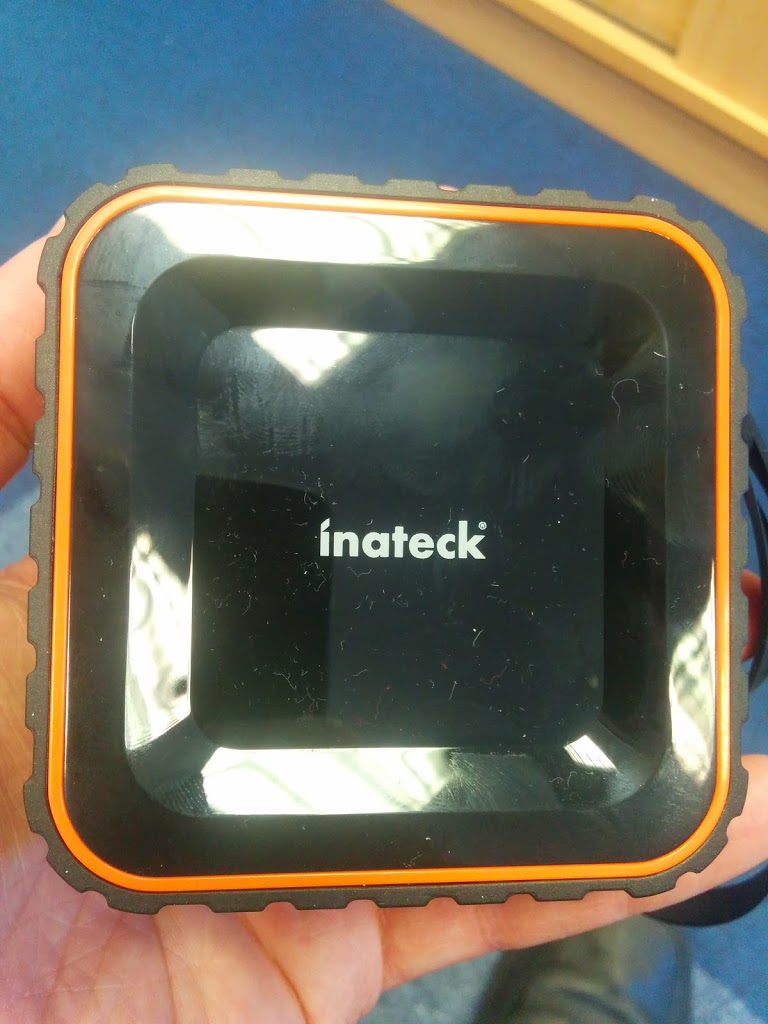 The Inateck IPX5 is an 8cm square, 4.5cm deep device that still manages to be chunky, despite being diminutive in size. It charges via a mini USB connection rather than a proprietary socket, which makes charging it a cinch and it’s also really easy to connect to. The range isn’t bad either, which makes the waterproofing a bit more sensible, since you can leave your phone outside the bathroom and still pump some music in their if you should so wish. But listening to music in the bathroom or kitchen is childs play; I had a much more entertaining test lined up for the Inateck IPX5 for my review.
I decided to see if I could use the Inateck IPX5 to play a little bit of a prank on my work colleague Maurice. While he was away from his desk, I positioned the compact speaker between the back of the screen on his laptop and the low level partition on his desk. Thus cunningly hidden, I awaited his return. Giving Maurice a couple of minutes to settle, I selected everyone’s Christmas favourite from Spotify- Sir Cliff Richard’s Mistletoe & Wine. I set it playing at a very low volume, gradually increasing it until by the time the first chorus hit, it was playing at full whack. The sound was mightily full and impressive from such a small device as the Inateck IPX5 and this is ultimately what gave the game away. Maurice was busy trying to work out how I assumed control of his PC and was broadcasting Sir Cliff’s finest when he realised it sounded rather too good. A minute or so of rooting around unearthed the speaker and a spontaneous cheer from around half the office.
I had no issue connecting the Inateck to either my Android phone or my wife’s iPad. Bluetooth has come on a lot from the early days where devices could be really picky over what the connected to, so I wasn’t really expecting an issue but it was still nice that it was that straight forward. The buttons are quite sensitive- they’re rubberised for the waterproofing by don’t need much of a press to operate. The RRP is apparently £50 but the device can be had for a smidge under £30, which seems about right to me.