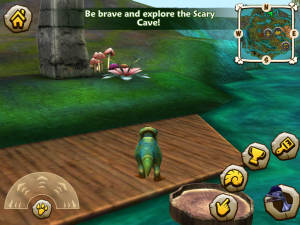 When we were offered a code to try Dino Tales, an iPad app that costs a reasonable £2.99 on the Apple App Store, I thought I’d give it a go. It’s not the price that puts me off buying apps; it’s the bewildering number of them to chose from that’s the problem.

Dino Tales is a dinosaur based learning app. We don’t have a long track record with learning apps, the only one the kids have played with for any length is the Reading Eggs app. That however is much more of an outright learning experience, Dino Tales is a lot more gamey.

Dino Tales involves hatching dinosaurs, looking for shells, fossils and other things for your dinosaur to do. You can even decorate (“spray paint”) your baby dinosaur by using the berry blaster. You navigate your dinosaur around a 3d world via dragging a dinosaur paw across the arrows in the bottom left hand side. When I had a go, I found it quite difficult to control but this didn’t appear an issue for Fifi (6) or the boy (7). I think they’re more used to touch screen controls than I am.

As you stroll around the dinosaur landscape, certain things sparkle to indicate you can interact with them. On occasion though you can’t interact because you haven’t hit trigger points to make something active. Anyway, you have 6 baby dinosaurs to hatch, and each one of them has an adventure to run through and at the end your child gets to make an interactive book based on what they’ve done.

When I had a go, I stumbled around a bit and managed to get my dinosaur on to a wooden floating platform. Novice stuff I’m sure but the boy has more to say:

“When I started playing Dino Tales I wasn’t sure what to think. It isn’t as fast as some of the games I like to play but I liked it because it didn’t keep on asking me to buy coins or things to make it easier. My dad gets cross with me when I ask to to buy coins in other games! You can paint your little dinosaurs different colours which is very funny. I liked it when I got to go in the scary cave. I didn’ think it was scary but Fifi was very scared. I wasn’t scared.”

You can ask Darwin, one of the grown up dinosaurs, questions via a simple to use question building wheel that contextually helps you choose the next word in your question based on the ones you’ve already picked. I’ve managed to make that sound clunky but it is quite simple in practice and is good for finding out lots and lots of dinosaur facts. And there are lots and lots and lots of dinosaur facts in the game- the more your child plays, the more drawn in to finding out about dinosaurs they’ll become.

There is an in game mechanism for limiting the time that your child can spend on the app (if only more apps have this as it’s not baked in to versions of IOS earlier than IOS8), which is accessible via the parent corner.

I think we’re at a pivotal stage in the evolution of apps at the moment. The “freenium” model (free to play but with lots of in-app puchases) appears to be losing popularity as players begin to realise that a lot of games are now designed to  make it really frustrating without paying 30p to speed up to your next turn, or £1 to buy some food to feed your pet, or whatever. I know plenty of people who would gladly play for a game to remove all these begging requests, if only a paid version existed. By supporting games like Dino Tales which lets face it at under £3 aren’t going to break the bank, we not only let our kids play something that’s both fun and educational, we make a stand against this rotten model of gaming that’s ruining everything. When the boy recently came to me and asked to buy some gems to buy a monster in a game, I almost had a heart attack and was so relieved I’d turned in-app purchases off because the gems were £79.99. That is a disgrace.

Rant aside though, the age range for Dino tales is given at 4-11. I think kids towards the younger age will get more out of it; at almost 8 the boy enjoyed it but not as much as Fifi did. It made a nice change from the likes of Subway Surfer and other twitch games they always seem to play. Dinosaurs go down well with kids and this games went down well with ours.

I am a member of the Netmums Blogging Network, a unique community of parent bloggers from around the UK who have been handpicked by the Netmums team to review products and brands on their behalf. I may have been paid expenses, and have been supplied with a product sample for this review, but retain all editorial control. All my Netmums Reviews will display the Netmums logo within the post.

This is a Netmum’s sponsored review.To find out more click the button: