As a family it would be fair to say we like puddings. I’m strongly in the camp that calls them puddings not desserts, I don’t know if that says something about me or not but that’s just how we are. Puddings. Most times pudding consists of either fruit, yoghurt or a fruit pie if the kids are lucky. On rare occasion, it will be a trifle.

Trifles have now been banned from our house, following an incident that will forever be known as Trifle Gate. That’s right, it’s big enough to get the proper noun treatment and the capitalisation that goes with it.

I had cooked a rather idiosyncratic meal at the behest of the kids- roast potatoes, vegetables and pan fried trout fillets. For the kids I cut the trout into finger strips and battered them prior to frying them, in some vague attempt to get them to eat something. It’s odd that at the moment the kids are disavowing all knowledge of their previous love of fish; they all used to eat it in quantities that would beggar belief but at the moment don’t seem to want to know. 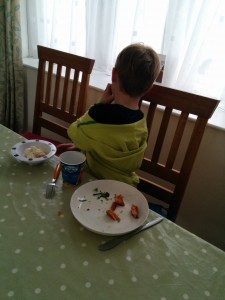 Anyway, the boy filled himself up with roast potatoes and picked at the fish, Ned took one look at the plate of food, shouted “yuck” and went off to find his hidden stash of “biscuits, and Fifi ate the lot with no argument. She’s a good girl. Fifi took her plate out and returned with the trifle. Wifey had eaten a portion of trifle the evening before, and this had drawn the wrath of the boy. However that was small beans next to what happened next. As Fifi dished herself up a modest bowl of trifle, the boy started what I can only describe as thrumming- he went purple and started vibrating at Fifi in a really aggressive manner and said in a hoarse whisper, “If you don’t eat everything you have dished up for yourself, including the cream on the side, there will be trouble as I could have eaten it.”  I attempted to diffuse the situation by dishing him up a bowl of trifle to eat once he’d finished his fish but since I left some trifle in the dish, this seemed to enrage him further and Trifle Gate really kicked off.

After a prolonged period of lying on the floor, alternately sobbing and raging to the heavens, I managed to get him to eat some more fish so he could move on to the trifle. Nobody else was allowed a look in at scraping the bowl out and to be honest nobody else wanted to be in the same room as the boy.

No more trifle in this house.