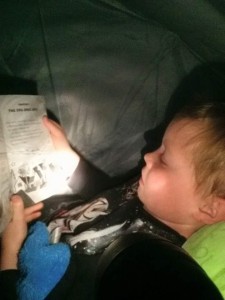 As part of his birthday celebrations, the boy was keen on spending a night under canvas with me in our new tent that was kindly provided by Sainsbury’s Active Kids. Fortunately I managed to avoid driving to a camp site and we just pitched the tent in the garden. After I’d stuck Ned on the naughty step (a conservative estimate would suggest I did this about 10bn times) for either throwing sticks at the tent or hitting it with stuff, we eventually got the thing erected as twilight set upon us.

One of the things with having three kids isn’t necessarily the constant demand for attention; rather it’s the demand for individual attention. All three of them love doing things on their own with either me or wifey. It’s easier with Ned because he’s at play group until lunch time, so there are a few hours every day when he’s around and the other two aren’t. Fifi likes days out, so either of us can take her out to a museum or the shops on our own and she has the best time of all. The boy however doesn’t particularly like going out, so it’s often a struggle to do something around the house with him without all the other kids incessantly interrupting.

This makes a garden camp out a great thing to do. We clambered into our sleeping bags at around 9:30pm, after 15 trips to the toilet (just to be on the safe side). At this time of year, no matter how warm it is in the day time, it can get blooming chilly at night, so we made sure we were snuggled down nicely in our sleeping bags on top of three carrimats each.

I had a great half an hour being read about 60 pages of a Captain Underpants book by torchlight, then we chatted about various boy stuff (included the oft repeated question of when he could watch a 12 certified movie- when you’re 12 was my reply), and it must have been about half ten when we settled down to sleep. The boy is never early to settle but does sleep exceptionally soundly and it was around 9am when we both woke up. It was nice to wake up naturally without Ned jumping on my head.

The following evening Fifi wanted a turn in the tent. Things got off to a good start but then she wanted to tell some spooky ghost stories. The first of which was truly terrifying and involved both her siblings being eaten by animals bought from a mysterious pet shop (a giant tarantula and a large dog if you must know) and them coming back to haunt the rest of us. Unfortunately Fifi did too good a job and when a cat scrambled over our fence ten minutes later she had completely scared herself witless and we had to go back in….