One of my favourite things about our trip to the Isle of Mull before we had kids was the storyteller tour we had of the Tobermory Distillery. Even now, about ten years after our holiday to the island, I still have a bottle in the drinks cabinet (my third or fourth, I can’t quite remember). I like a  nice single malt, especially on a cold winter, or more pertinently frosty spring evening. 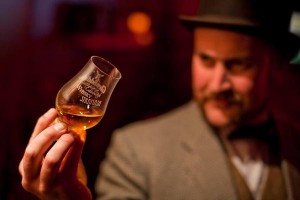 Of course in Scotland they take this sort of thing a heck of a lot more seriously than we do. Every May in Edinburgh they hold what the Scots call a Whisky Stramash. Stramash itself literally means an uproar, so taken in the context of whisky, it’s not hard to guess what sort of event they’ve got in mind. At the Edinburgh Whisky Stramash there are literally hundreds of different Scottish whisky available to taste and buy over several individually ticketed sessions on 23 and 24 May. Think a beer festival for those with less of a paunch and a taste for more refined alcohol and you’ll probably get the idea. I’ve always like the phrase pocket watch to refer to a large measure of whisky and Scotland in May seems like the ideal time and place to indulge in such an undertaking. The great thing about whisky is it’s a drink you can savour because it tastes good. It’s not drunk by the sort of person who sees it as their mission to down ten pints of lager as quickly as possible and either have a fight, a kebab or both at the end of the night, it’s a drink for connoisseurs.

Edinburgh itself is of course a city steeped in history and tradition, so it’s entirely possible to convince your significant other that a completely cultural trip can be had to encompass the Stramash and a few other cultural places too. Unfortunately the timing doesn’t quite work for the Surgeon’s Museum as it’s closed until the summer for renovations but it’s actually in the same building as the Stramash. Instead you’ll have to walk (or weave after a trip to the Whisky tastings perhaps) along a few streets to get to the National Museum of Scotland. The warm glow will allow you to take in the wonder that is the 200th anniversary of Pringle (those of epic jumper fame, not the crisps just for clarity).

My plan would of course to be to take the family with us, crash at somewhere like the HI Edinburgh City West (kids stay free and their family rooms are pretty epic) and let wifey and the kids roam the city for an afternoon while I sampled the more obscure whiskies and perhaps purchased a bottle of two for future enjoyment. We could then hit one of the restaurants for a nice spot of dinner, have an early night and enjoy a family day out the next day. That’s the great thing about going to a big city like Edinburgh, there is literally plenty for everyone to do.