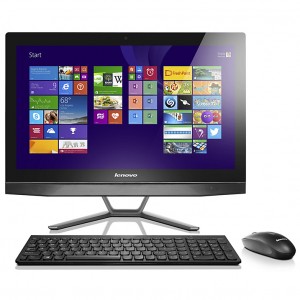 Lenovo is almost as bad as Sony when it comes to thinking up naming conventions for their products, so when the B50-35 landed on my doormat for a review, I wasn’t entirely sure what to expect- the B50-30 for example is a budget laptop. I must admit I was a little disappointed it wasn’t an Astromech droid like R2D2. Instead the B50-35 is what’s known as an All-In-One (AIO)- it’s effectively a computer built into a monitor. AIOs are nothing particularly new, and although they were popularised by the iMac a few years ago, they’ve been a round for ages. Still, the cheapest iMac is £899, and you can pick up a larger touchscreen enabled Lenovo B50-35 for £250 less (for example, John Lewis are selling them instore for £649), which to my mind represents somewhat of a bargain.

Is it a bargain? We put it to the test to find out.

The Lenovo B50-35 has a full HD 23.8 inch screen. Even up close the display looks lush and the chances are that the screen you use on your current computer is considerably smaller. Day to day I use a 13 inch laptop but we do have a more powerful desktop machine that we use for the odd bit of video editing or playing some video game. All in, with the 21 inch monitor and everything, that cost considerably more than the B50-35 does.

Opening the box and taking out the AIO gives you a sense of quality- the unit is heavy and seems well put together. This is reinforced by the touchscreen covering on the monitor. There is an array of stickers on the back, IPS, JBL, Dolby, and AMD, which add to this sense of quality. JBL are renowned as manufacturers of great speakers and it’s nice to have an IPS screen, even though the tilt base allows you to adjust the viewing angles. The base itself is heavy and makes the device feel very sturdy- this isn’t a unit that’s going to get knocked over easily. 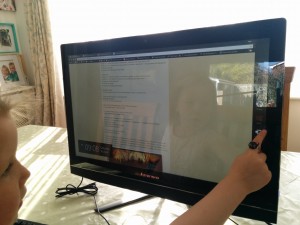 Once we set the machine up the touchscreen proved to be more than a little bit of a revelation. The kids have always used tablets and swiping on a screen has naturally made sense to them. I have to admit since I got a touch screen laptop, I’m the same and often confuse myself when I use my wife’s Macbook when I try to scroll a webpage down and the only result is a fingerprint on the screen.

Fifi was soon updating her blog, scrolling around using her finger rather than the mouse, and it all seemed very natural. Given that the screen is touch enabled, I don’t think I’d like it any larger as you obviously have to sit quite close to it in order to reach the touchscreen. Fifi now has the B50-35 as her go to machine for her fledgling blogging empire. The boy of course is using it mainly to watch YouTube videos as the TV in the playroom isn’t smart enough for that. Talking of smart, the B50-35 also has a HDMI input as well as an output for dual monitor set ups, which means you can use it as a telly if you input from a digibox of some description. I’m fairly sure you have to have the computer on to do this (the documentation doesn’t mention it however), so it’s not a long term solution as a hybrid TV/computer set up as you don’t particularly want to have all the computer functionality running while you’re watching Eastenders but it’s nice to know you can do it if you want to.

Because the B50-35 has a powerful AMD A10 7800 APU (for more about APUs, read my blog post on AMD) onboard, it’s more than useful for a bit of gaming as it uses AMDs expertise as one of the two major graphics card developers to put great graphics on the chip alongside the CPU. Don’t get me wrong, since you can spend half as much again on just a graphics card, you’re not going to have the world’s most astounding gaming experience but I was able to load Steam and play quite a few games in my library at 1080p with the details on medium/high. In PC gaming terms, that means they look as nice as the do on the Playstation 3 or the Xbox 360, which is a nice bonus!

I have to admit it’s been a long time since I’ve had AMD powering my computer. I’m currently feeling a little silly about this because the B50-35 runs pretty much flawlessly. It boots as quickly as you could hope for something with a mechanical hard drive, it’s very quiet when running intensive software or watching full HD movies. It has a built in DVD drive, which is good for watching movies on the bundled software but given how gorgeous the screen is, it would have been nice to see a BluRay drive included. Likewise the WiFi works perfectly well but it would have been nice to see dual band on G for extra speed (our router doesn’t use wireless n and the computer doesn’t have the latest ac set up). A wireless keyboard and mouse would have made more sense too- this would have meant that you could set the system up with one single solitary cable running from it, which would of course be the power cable! Still, these are nitpicks really, and whilst they would be unforgivable in a machine costing two or three hundred pounds more, at this price it’s almost churlish to complain. Time and time again I had to remind myself that the Lenovo B50-35 is available for £649. In context, you can spend up to £200 for a stand alone touch screen monitor of a similar specification. There’s plenty of memory, plenty of storage and the system whizzes along at a fair old lick whilst not being noisy enough to distract from what you’re doing.

If you’re interested in the full spec, here it is:

As far as it goes, the Lenovo B50-35 is an ideal computer for a family. Internet safety bods will always tell you a computer that children have access to should be kept in a communal room and that kids should be supervised. We’ve done this previously by making the kids use laptops in the sitting room but the form factor of an all in one lets you be a lot more flexible in where you seat your computer. Currently we have it on the dining room table and move it next to the fish tank for meal times but I could easily see something like this on a unit with the kids pulling up a chair to use it as when appropriate. Not having a huge black box to stick somewhere makes it so much more appealing, and the touchscreen is the icing on the cake for kids who are growing up in a touchscreen world. Lenovo let me keep this machine- it had done the tour of all the tech bloggers for review, so wasn’t new out of the box. This hasn’t affected my opinion though. Honest.