There might be many things wrong with the high street generally at the moment but specifically in St Albans we can at least be thankful for the boom in locally own and run restaurants. I have no particular grip with chains but they can be and more often than not are rather dull and formulaic. Personally I’ve always been a big fan of the whole shop local ethos, and never more so when it comes to food. I’d rather eat at a restaurant or cafe that is owned by the people that run it because they’re invested in making it a success and that often reflects on the menu in a way it simply can’t if you’re running a chain or a franchise.

So when I was invited to a preview evening at a new Turkish restaurant called Tabure, it wasn’t a particularly difficult decision to make. I like my food, I like trying new things, and I also managed to avoid reading Ned about two hundred different bed time stories while everyone else was out at Beavers. Result! 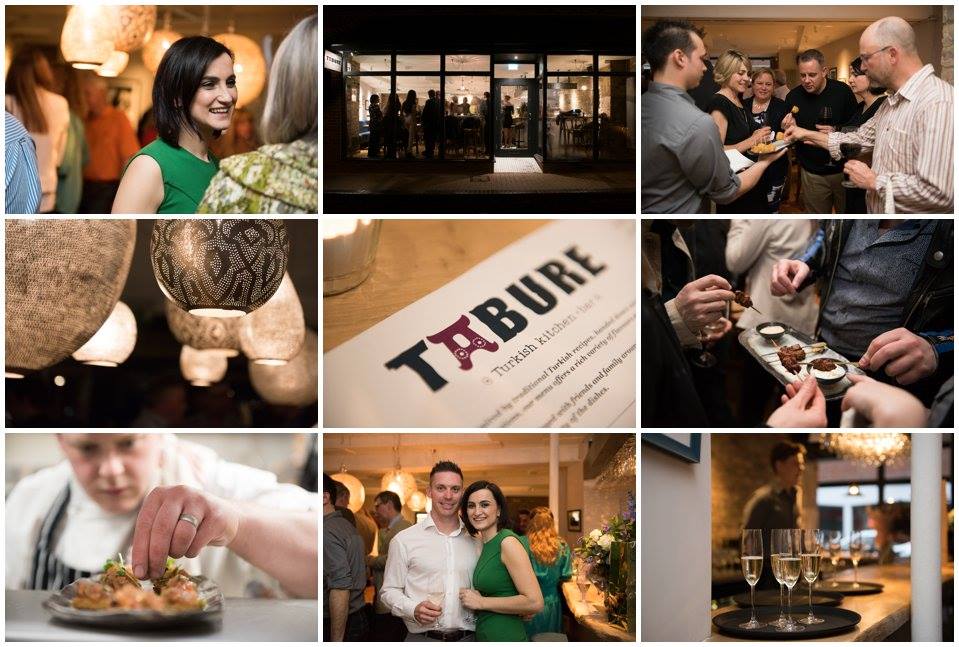 If you know your way around St Albans, you’ll find Tabure in the building that the Japanese restaurant used to be in on Spencer Street (number 6), but you wouldn’t really recognise it as the new owners, Mark & Hulya have done an enormous amount of work on it. Chatting to Mark, the fact the building used to be a building society made the work even harder as everything was reinforced concrete- I get the impression that come the apocalypse, we’ll all be able to enjoy Turkish food at the one remaining eatery in St Albans amid the rubble.

I liked the design of Tabure. There is plenty of exposed brick and wooden floor, along with some nice tile work around the bar. There are a couple of ceiling mounted air conditioning units, which will prove a god send in the summer months too. Once you’re inside and settled, it’s easy to forget you’re in St Albans and you could be in the Turkish quarter of any large European city.

Tabure is a bright and airy restaurant with 90 covers, a bar, and a kitchen that also features a grill that’s in plain view of the customers. It’s nice to be able to see your food being cooked and the skill that goes in to it. Like any good owner managed business, an emphasis has been made on sourcing good ingredients from reputable suppliers. And the suppliers certainly have a lot of credentials in terms of sustainability, currently a big buzzword in catering.

Of course any restaurant lives and dies by the food it serves to it’s customers and I’m pleased to say I liked everything I stuffed in my chops. I even managed to induce a moment of panic in one of the staff who asked me how I was finding it- “I’ve got this strange feeling [long pause], I think it’s what other people call full. In fact now I realise how Mr Creosote felt when he had just one more wafer thin mint.” It was the long pause that did it!

We had a selection of dishes from the menu in bite size portions and without exception they were great. Particular mention should go to the battered and stuffed (with ricotta) courgette flower- I’m struggling to think of a vegetable dish I’ve had that’s tasted so good- and also to the seafood. The seabream, cod and john dory were particular tasty but then so was the lamb sac tava, and the lamb cutlets with chilli. You’re probably beginning to see where my Mr Creosote moment came from- I couldn’t stop sampling the food.

With the lady wife’s birthday fast approaching, I’m now sorely tempted to take her away from our usual restaurants of choice and book a table at Tabure. It’s the sort of place where you can sit and eat a stack of sides and aperitifs if you don’t fancy getting stuck in to one of the main courses.

I’m pleased to say the restaurant is now open and you can make bookings here.