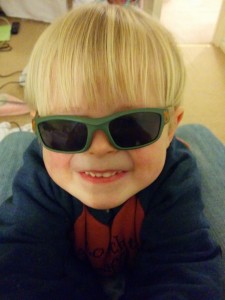 Yesterday was, swimming lesson aside, a day around the house. The Boy finished his homework, did some drumming, watched a movie and played some LEGO Marvel Superheroes on the Xbox 360, while Ned and I spent most of the day outside doing stuff. The girls went to the shops for a few hours, leaving the house a boys zone.

Ned loves watching TV, eating snacks, and generally pretending he’s 8 years old (he’s not, he’s 3 and the youngest of three) but he absolutely loves being out in the gardening. This is down to wifey and how brilliant she is will kids but to a greater or lesser degree, they all love gardening.

Three is a brilliant age though, because when a three year old loves something, he really loves it and throws himself in to it body and soul. There’s no self consciousness at all and it’s brilliant. Ned put himself fully into his task of collecting all the snails in the garden, and I was kept appraised of his progress by loud exclamations of “Look! There’s a SNAIL!” every time he found one. I was also regularly shown the large flower pot he was storing them in, so I could see all the naughty snails who were trying to escape.

All in all it was a perfect tonic for what had been a pretty disappointing week, what with the election result and everything that comes with that.