Parent bloggers in the UK are a diverse bunch- we’re in to so much more than just writing about our kids- craft, frugal living, food, and a million other different things- and right now family holidays seem to be very much at the fore. Of course this isn’t anything particularly new; I know a few cruise companies have been sending some parents sans kids on family cruises for years, I’ve been a Butlins Ambassador myself and we’ve been on a “for review” package holiday to a water park in Northern Italy before the kids were in the full time education system. What does seem new (to me at least) is the volume of these offers (enough for some bloggers to start specific family travel blogs off the back of it) and the seemingly intentional targeting of families with kids of school age for trips in term time.

I can sort of see the point of a quick break to see a family resort without the kids (I was invited on this one last year but had to drop out at the last moment due to work commitments) but really, what’s the point of going on a family holiday without your family? Times are tight and I know there is a definite temptation to see a free review holiday as a substitute for actually paying for a holiday but there are pitfalls with this. A lot of agencies don’t realise that bloggers are inherently different from journalists. Journos are paid to do what they do and if a trip is cancelled, they have something else to do lined up at work. They won’t have to explain to three kids that they’re not going on that trip any more.

I’m sure I’m not alone in experiencing the silence from an agency when you email a week or two before an agreed trip, only to find out after more emails and maybe a phone call, it’s not happening any more. It’s not unusual and we’ve come to see any trip like this as an nice bonus of what we do rather than what we do.

The law on taking kids out of school during term time are quite clear: 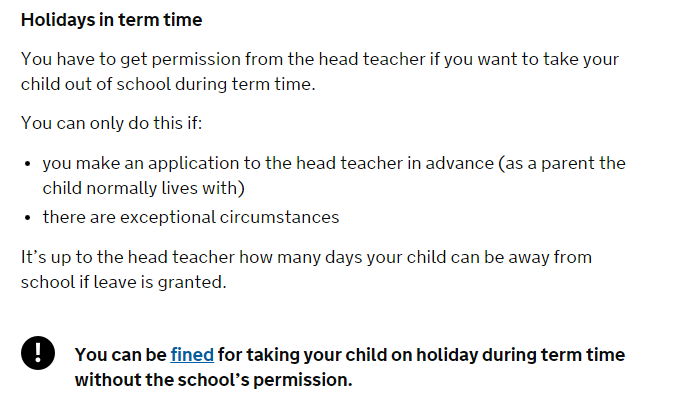 Penalties start with a fine of £60 but repeated absence (or failure to pay the fine) can lead to prosecution:” You could get a fine of up to £2,500, a community order or a jail sentence up to 3 months. The court also gives you a Parenting Order” (i.e. sends you off to parenting classes).

I’ve politely turned down any approach about a review holiday in term time (for a number of reasons, including our eldest’s need for routine, the fact the school will almost certainly turn it down, and of course the kids educational needs) but I know from reading comments on Twitter and Facebook, a lot of bloggers don’t. Some try to do the right thing and get permission in advance (often with no luck), others just wing it and front up to the school afterwards. My understanding is any school that considers a free review holiday as an exceptional circumstance would be in a distinct minority, which is understandable I suppose.

I’m not going to make comment on whether I think the rules are a good or a bad thing other than I’m sure for every parent that takes their kids out of school and provides them with a wealth of educational stimulation while they’re away, I’m sure there are ten that don’t. It’s unfortunate that responsible people have to suffer for the irresponsible but I don’t see any easy way to sort it out other than the system that is in place.

When a qualified teacher (who wasn’t in a teaching role at the time) took her two kids out of school earlier this year for a trip to Peru, there was a lot of debate when the family was fined. The “they learnt more with me on holiday than they would have in the classroom” argument is a common refrain and one I feel some sympathy with. However, the curriculum is now so narrow and so focused on testing, whatever the kids would have learnt in Peru, whilst benefiting them as people, almost certainly wouldn’t have benefited their school education.

When we go away, as we did over a long weekend that finished with an inset day, there is usually an educational aspect to what we do and see- neither of us are people who like to lounge on the beach or go around theme parks all the time, but even talking to the kids about the stone age and the meaning and  mythology around long barrows doesn’t neatly tick any boxes as far as the school is concerned- it’s about us teaching them additional stuff.

I think a large part of the issue are holiday companies and PR agencies offering these free trips during term time. Whether you look upon it as holidays having a massive premium during the school holidays or being deep discounted during term time, it’s an inescapable fact that the vast majority of trips on offer are in term time. From an agencies point of view it’s understandable- it’s cheaper for them and it also means they have a lead time so any content generated can have an impact on bookings for the upcoming holiday season- but it obviously does cause an issue when it comes to school.

I don’t know what the answer is, I’m not even sure I know what the question is but if you’ve made it this far, I’d love to know your thoughts on the matter.