Being the youngest of three, there are plenty of things that Ned gets to do and see earlier than either of his siblings. From the age of one he’s been holding a Wii U controller (sans batteries) and “playing” Mario Kart or something similar. Now he’s three and a half, he’s beginning to get to grips with playing console games himself. He’s already mastered the touch screen and can successfully turn the television on, get the FireTV stick going and find his way onto Netflix and put Diego on. 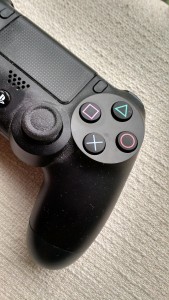 Now days he has the old stroll around the open world vistas of LEGO City or Marvel SuperHeroes (eschewing the missions in favour of just mucking about) but he’s taking it all in- yesterday we were out in the car heading towards the library to sign up for the summer reading challenge and something rather awesome happened. The boy (8) asked me why there were three foot pedals in the car when we have just two feet. I explained the concept of a clutch and its related pedal to him, and said the other two pedals were to go faster and brake. A little voice chipped in, “No dadda, triangle makes you go faster.” After some consideration, he elaborated that it’s the button on the ‘troller that makes you go faster, the one with the triangle on it.

My work here is done.