Yoshi first made an appearance in a Mario game way back in the SNES game Super Mario World. Mario could jump on the back of a Yoshi, who could shoot out his long tongue and capture baddies, turning them into eggs. Since then, Yoshi has gone on to feature in a string of games, included several of his own, and culminating in this platform-fest, Yoshi’s Woolly World.

Yoshi’s Woolly World sees Yoshi and his friends made of yarn, inhabiting a world likewise made of wool. All the scenery is textured like wool; you can grab loose threads and unravel obstacles, when Yoshi swallows a baddie, he becomes an egg like normal but it’s actually a woolly egg. The plot is simple- an evil wizard turns most of the Woolly Yoshis (it’s the name of the species as well as your character, more or less) into yarn and scatters them across the world. You have to guide your Yoshi to find them all and defeat the bosses. Simple but great fun! The wool effect extends past the graphics- the platforms are a bit soft, like wool, you can, as I mentioned, unravel blocks or platforms and more. It’s all cleverly integrated into a beautifully realised world. 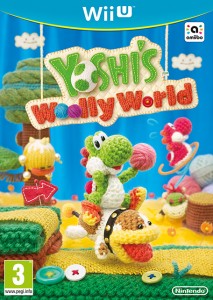 Nintendo games might look super cute but for the vast majority of first person titles (that is those made or directly supervised by Nintendo) they are usually very tough. As a kid I remember getting hopelessly frustrated with Super Mario World on the SNES. I would have been 15 or so at the time and theoretically had the sharpest reflexes and best hand to eye coordination I’ll ever have but some of the levels would literally have you in tears they were that difficult. The first Yoshi title, Yoshi’s Island, also on the SNES, was equally as difficult and the recent 3DS version attracted some comment for how hard it was. Well, never let it be said that Nintendo don’t listen because Yoshi’s Woolly World has something called “Mellow Mode”, which cranks down the difficulty enough to let younger players experience the joyful worlds that Nintendo have created without having to result to being a passenger while Dad or an older sibling play.
This acceptance that we’re not all hardcore gamers is something I’ve noticed in a few Nintendo titles recently- Captain Toad Treasurer Tracker lets you fail miserably for a certain amount of time on a level, and then it will make you invincible. You can still fall off platforms so there is still a challenge on the levels that require precise timings but you don’t have to worry about the baddies hitting you, which makes a massive difference.
To be honest, at 40 I appreciated the ability to turn Mellow Mode off and on during play- I’d love to say I was able to put 4 or 5 hours a night in to playing the game on regular difficulty to get a proper feeling of how it plays but with three kids under 10, a full time job and other responsibilities, the chance to sink my teeth into a game for a long time in a short time frame is pretty much over. I ended up playing on normal difficulty and dropping it down in game to mellow when I got a bit stuck or wanted to get to the end of a level before bed time. 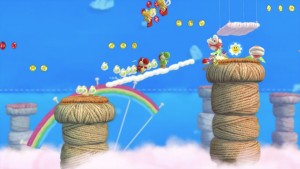 Having said that, Yoshi’s Woolly World is pretty enough that it’s actually a delight to watch other people playing it. Watching my 6 and 8 year old play together (I hesitate to say co-op as it descended all too frequently into a battle to see who could get their Yoshi to swallow the other person’s Yoshi and all the tears that eventually involved) was a genuine delight. As a spectator you see a lot of the graphical touches and flourishes you don’t tend to notice when you’re busy avoiding shy guys or aiming for a target with a ball of wool. A lot of comment has been (unfairly) made over the power of the Wii U against the PS4 or the Xbox One but the only game on either of them that looks remotely as pretty as this is probably Rayman Legends and whilst it plays well, when it comes down to a battle of who can make the best platform games between Nintendo and anyone else in God’s whole creation, Nintendo are always going to win.

Yoshi’s Woolly World is out now on Wii U and an absolute delight to play through. You’ll find a stupid grin on your face frequently and will inevitably find yourself revisiting levels to collect all the yarn balls or flowers you missed the first time round. An essential purchase!