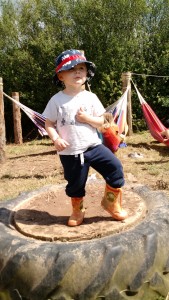 I’m sure we had one, even recently I recall Ned as a little fellow chattering all the time about nonsense but he’s gone, replaced by a “big boy”, who doesn’t want his hand held, sleeps through the night without a nappy, gets himself his own breakfast and so on. The only sticking points are: getting dressed (getting undressed is definitely not a problem, he can do that at the drop of a hat, often at inopportune moments), putting shoes on and crossing the road.

It is now officially impossible to put Ned to bed before his 5 years older brother goes down, as he will just rail against the injustice of it all until we give up. He’ll fall asleep on the sofa rather than put up with going to bed earlier than his brother and sister, which is cute but does use up a considerable amount of sofa real estate.

Ned is even beginning to be able to do things without the constant comforting presence of teddy, although when at home or tired, teddy is still a necessity.

They’re only little for such a short period of time, I’m beginning to feel that sense of loss you get when you’re kids grow up a bit and get more worn down by life and worries. I hope Ned has a happy year at nursery and still stays as madly cheerful as he always has!