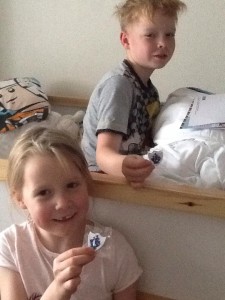 When I got home from a rather full day out on Saturday (just the usual- you know, the cast & crew screening of Spectre, a trip to the Emirates to watch Arsenal almost pummel Everton, that sort of day), I found out my two eldest had received something rather special in the post. They both had Blue Peter badges! Over the summer they wrote some stories and sent them in to Blue Peter. We assumed nothing would come of it but it would keep them occupied for a morning or two. Several months later, they both received a badge!

I never entered any competition or sent anything in to Blue Peter when I was little, much to my chagrin, so to be able to vicariously succeed where so many fail is super awesome. It also makes up for Ned crying all the way through swimming on Sunday when wifey came along to watch him!