I don’t think I’ve ever reviewed a film with quite so many colons in it as Lego DC Comics Super Heroes: Justice League: Attack of the Legion of Doom, or with such a long title but I’m glad we said yes when WB offered us a review copy of the film.

Coming in at 77 minutes, it’s obviously not a LEGO Movie sort of animated epic but given the 8 year old has recently completed LEGO Batman 3, it’s timely and full of characters he knows and loves.

Attack of the Legion of Doom plays out like a series of cut scenes from a LEGO Batman game in a sense. The dialogue is typical LEGO game; sharp, quick witted and humorous, in short completely in keeping with the LEGO universe. 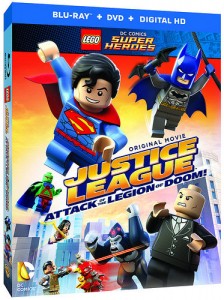 The plot is simple, yet fiendish, in the way that comic books often are. the newly formed Justice League makes poor old Lex Luthor quite cross, foiling all his schemes and such, so he decides to form his own super (villain) group, the Legion of Doom. It’s a subtle dig on the super hero arms race that more adult super hero comics have picked up on over the years.

The astute among you might have noticed that Batman is blue- he’s not the Batman from LEGO movie and doesn’t behave quite in the same way but for the kids, they won’t really notice the difference. Batman is fundamentally Batman. The rosta of superhero characters is pretty awesome, including a few of the more obscure ones, which was nice for me but all the same for the kids.

Justice League: Attack of the Legion of Doom is one of those films you can watch with your kids (at least the first time or two, I draw the line at 19 times consecutively) as the humour works on multiple levels and the frenetic pacing is offset by a manageable runtime of a little over an hour and a quarter. This one has been on regular rotation since we received it a couple of weeks ago, with only occasional breaks for My Babysitter is a Vampire getting in the way of wall to wall superhero action. I have to say that I love what LEGO have done with the characters in terms of the minifigure models, they are ultra cool, and the boy and I have regular debates over the best sets to buy to increase our minifigure superhero cache.

All in all this is a great film for fans of LEGO, fans of the LEGO Batman video games and those impatiently waiting for LEGO Movie 2 or the LEGO Batman movie to hit the screens.