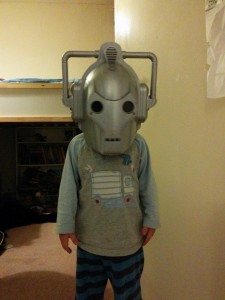 The kids have always liked dressing up from an early age. Fifi is obsessed with dressing up as a cat and does so just whenever she can. She’s on her third cat costume now, having outgrown the other two.

On the school run the other day, our 8 year old was musing the best way to dress up Ned (3). Perhaps it’s down to watching the Hobbit films recently but the boy hit upon the genius idea of dressing Ned up as a Hobbit. Ned of course had no say in this whatsoever. It was the 8 year old logic that was brilliant though and pretty near faultless to boot. Ned, he rationalised is pretty short any way, so he’s half way there. Just stick him in some “rustic” clothes, a pair of flip flops because Hobbits go barefoot but we don’t want to hurt his feet and then, the stroke of genius, just stick loads of fake moustaches all over both his feet. HOBBITS HAVE HAIRY FEET.

I’m tempted to give the kids free rein on this one. I mean, how bad could it go? Are we talking as bad as the time they tried to make a life size Millennium Falcon out of cardboard toilet roll tubes bad? Could it be worse? What would get stuck to the cat with PVA this time???